How is Giannis’ season stacking up to his MVP year so far?

How is Giannis’ season stacking up to his MVP year so far? 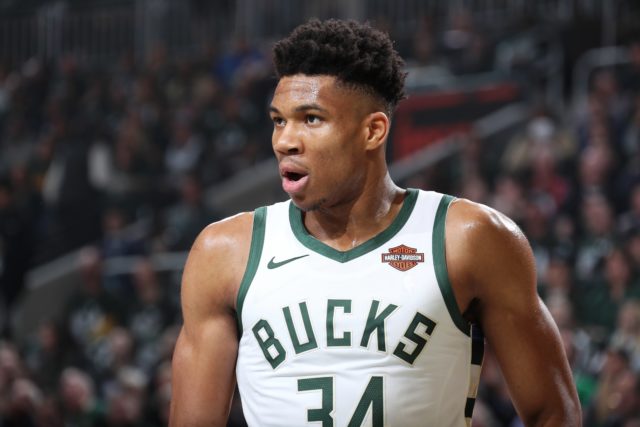 Despite suffering their first loss since Nov. 8 and thus seeing the end of their 18-game win streak on Monday night, the Bucks still have a lot to be happy about. Currently sitting atop the Eastern Conference standings, the team is a favorite to face the projected Los Angeles Lakers in the NBA Finals in a potential showdown for the ages between Giannis Antetokounmpo and Lebron James.

This of course, is assuming that the Bucks will be able to maintain the momentum they’ve carried throughout the first third of the regular NBA season. A momentum which, is spearheaded by the herculean efforts of the aforementioned, reigning league MVP and possible real-life superhero: Giannis.

Every night he takes a step onto the court, Giannis seems to make a case for being MVP again and this isn’t just my local bias taking over — he currently ranks number one on NBA’s weekly official (and wordy) “KIA Race to the MVP Ladder” (as of Dec. 13).

Becoming a rare back-to-back MVP in the NBA is truly a feat; you need to stand out as the best in a league of the best players in the world, doing so while overtaking the accomplishments of your previous season and has only been accomplished by eleven other players in the award’s nearly 65-year-old history. This got me thinking: how is Giannis stacking up to his performance last year at this same time?

So with the first 28 games down, I compared the Greek Freak’s stats with those from the first 28 games last year in hopes that I could glean some insight into how special he has been playing so far — and where he could go from here.

Let’s start with the most simple stats to evaluate: wins and points.

Whereas last year the team started the season with a 7-0 run which tied the franchise record set in 1971, this season is actually off to an arguably more impressive start thanks to the aforementioned streak which just came to an end. This streak has resulted in the Bucks going 24-4 in contrast to 19-9 last year and although not a direct evaluation of Giannis’ performance, he is the team’s superstar and with this increase in wins, there has been an increase in sheer points he has produced.

With a more than respectable 26.6 points on average last year, Giannis has elevated that to a whopping 31.7 points per game now and when looking at the nitty-gritty of his scoring, it’s easy to see how.

Not only is Giannis making more field goals than last year on a greater number of attempts (approximately 60 percent on 562 shots compared to 56 percent on 444 shots) but he has also gotten closer and closer to conquering his Achilles’ heel: the dreaded three-point shot.

Giannis’ relative inability to make a jump shot has become sort of a meme as the rest of his game has developed and if you look at this point last year, it’s easy to see why — he was shooting about 12 percent on only 61 attempts. In fact, he was the worst three-point shooter with a minimum of 50 attempts. And it wasn’t even close with the second worst player in Jonathan Simmons being a full 10 percent ahead of him.

A year (and tons of practice with Kyle Korver) later, has Giannis shooting 32 percent from the three-point line so far on more than double the attempts at 137. Not only has this compensated for a decrease in free throw percentage from 66 percent to 60 percent but also brought Giannis closer to the terrifying final form he looks to be one day. While not yet at an elite level, as one Twitter user elegantly put it during the playoffs earlier this year:

But what about the non-scoring stats which can make just as much of a difference as how well Giannis can shoot the ball? While not as groundbreaking as his change in scoring during the 28-game period, Giannis is staying on track with his rebounds, assists and steals — either remaining exactly the same in the case of steals (1.3 per game) or marginally worse in the case of rebounds (13.2 in 2018 to 12.8 now) and assists (6.1 in 2019 to 5.3 now).

All of this is to say that Giannis’ place at the top of the current MVP race isn’t unearned or a result of hype. As I said before, becoming a back-to-back MVP is a historically difficult thing to do as it requires not only outperforming everyone else, but outperforming yourself. The Greek Freak is doing just that as he is improving on what he did well last year and establishing greatness in what he didn’t, all while leading his team to first place in the Eastern Conference.

The Bucks’ next game is a potential preview of the NBA Finals as Lebron, Anthony Davis and the Lakers come to Milwaukee on Dec. 19 for a nationally televised matchup on TNT. Both teams are 24-4 and looking to establish a new win streak as they come off of losses.