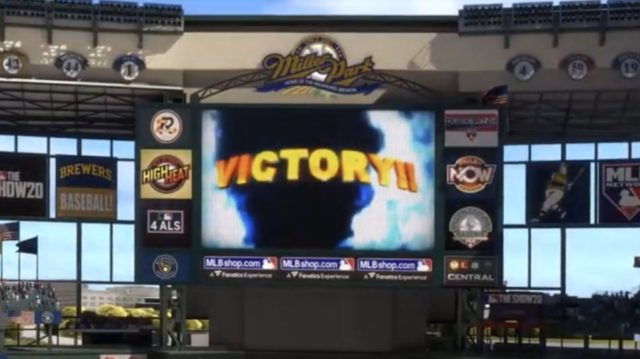 We are now two weeks removed from when Major League Baseball’s opening day would have been. The Brewers would have already played nearly a dozen games and the National League Central division would be slowly taking shape. While it’s uncertain when (or if) baseball will return to Milwaukee this year, that doesn’t mean that the city has to be devoid of the sport and the excitement of a pennant chase.

This is where simulations of the MLB season come in. The renowned tabletop board game company Strat-O-Matic and MLB itself have begun simulating the 2020 season purely through statistics on their respective sites. However, these lack the spectacle of a televised game, as they are essentially spreadsheets. Thankfully, MLB licensed video game series such as “R.B.I. Baseball” and “MLB The Show” exist with the latter in particular presenting each game as an MLB Network broadcast complete with announcers, replays and post-game interviews. Moreover, the game allows players to simulate this broadcast without playing themselves, allowing the artificial intelligence to decide who wins and loses.

Local Brewers fan Skylar Czaplewski has taken it upon himself to simulate the Brewers 2020 season in this manner, one day at a time and through streaming the games on YouTube. Starting on what would have been Opening Day (March 26), Czaplewski has been taking the scheduled matchups and simply letting them play out within “MLB The Show 20,” using downloaded rosters which are about as close to what they would have been as possible (the real-life MLB season was suspended before spring training could end and certain roster cuts/moves would have even been made).

Czaplewski schedules the streams out ahead of time and announces them via Twitter with each game running about an hour and a half in length. He even remains in the stream’s chat and recaps the game in real time, shouting out cool moments and expressing disappointment with strikeouts. All of this helps to make it feel like you’re watching an actual game with other fans despite the underlying artificiality of the player animations and stilted in-game commentary.

And it is this sense of community which Czaplewski hopes viewers ultimately take away. He recognizes that there were a lot of high hopes and expectations surrounding the team coming off of last year’s Wild Card game loss and an almost entirely new roster.

“Sports seem like a way to unite people … and we need it now more than ever,” he says.

To spread this sense of community even further, Czaplewski has taken to visiting the online communities of the teams which the Brewers are facing to let them know that he’ll be streaming the series. So far, this has resulted in rival St. Louis Cardinals and Cincinnati Reds fans supporting the stream and bringing more than 100 viewers to check out the competition.

Czaplewski explains, “I didn’t expect to get more than five views on each game, but if I can even brighten five people’s day, I think it’s a success.”

Currently, this virtual Brew Crew is standing at 3-8 with Yelich and Keston Hiura standing out as anticipated in real life. Unfortunately, shortstop Orlando Arcia has been making far more errors than anticipated and Lorenzo Cain’s offensive slump from last season seems to be continuing. Czaplewski remains optimistic however that the team can turn it around as he knows the team is far better than the record shows and is done facing tough division rivals for the time being.

No matter how the virtual season turns out or if the real world season is cancelled completely, Czaplewski currently plans to play the entire 162-game regular season and ensure that the simulated team will play in the 2020 World Series.

Future and past streams can be found on the Brewers MLB The Show 20 Simulations YouTube Channel where you can be notified of upcoming ones by subscribing. Czaplewski is also running a Twitter account where he is sharing the streams as well: BrewersSimulation.

For more ways to support Milwaukee’s sports teams virtually during quarantine, check out our guide to bringing Bucks and Brewers jerseys to Animal Crossing.