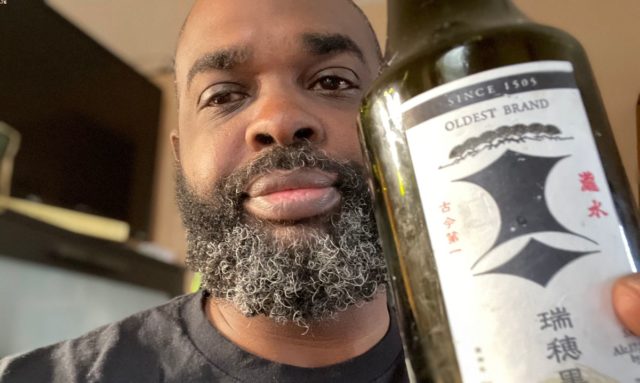 On April 29, Netflix will release “Yasuke,” a six-episode anime series based on the African who became the first foreign-born samurai. The series was created and directed by LeSean Thomas, who worked on the “Boondocks” animated series. The series also features LaKeith Stanfield as the voice of the mysterious and legendary Black samurai and Flying Lotus, who composed the music for the show and is also the executive producer.

I have been personally interested in the story of Yasuke and Japanese culture in general, and I wanted to do something special for this anime. So I decided to pair the anime and the first two Flying Lotus singles from the soundtrack with sake.

Why sake? I have always had a love for sake since my first taste back in college in the late ‘90s. Last year, I wanted to learn more about the national beverage of Japan and set out a goal to learn to brew my own sake within three years or by the time I turn 50. This past January, I started my journey into sake by taking a Sake Professional Course from the Sake Education Council. At the end of January, I passed the exam to become a certified sake professional. I mapped out the first year of my journey to learn as much as I can about sake, including ordering and trying many types of the brewed rice beverage, reading industry news, and even listening to sake podcasts. And now, I will be hosting a few sake tastings this spring at Milwaukee’s No Studios.

With the announcement of the “Yasuke” series, I found an opportunity to combine my love of anime, music and sake by pairing the anime and the soundtrack with sake. Folks have been pairing wine with music for years. I figured it was time to do the same with sake. But these pairings have a deeper meaning for me. The story of Yasuke shares parallels to the creator of the anime LeSean Thomas and even my own journey into the world of sake. LeSean is an African-American man who lives in Japan and works in the world of Japanese anime and creates a show telling a story of an African who becomes the first foreign-born samurai warrior.

And as a Black man, I’m now on a journey to learn about sake, a beverage steeped in Japanese culture, tradition and history just like being a samurai and even a creator of anime. And I hope to brew my own and become a toji aka brewmaster. Creating these sake pairings was a challenge, but it also provided me an education that I couldn’t receive from any book or class.

Let’s begin with the first pairing. The sake I chose is meant to be paired with the overall Yasuke anime series. I wanted to find a sake that symbolizes the tradition of the samurai warrior with the uniqueness of a Black man from Africa stepping into this traditionally Japanese role. The sake had to represent legacy and foreign at the same time. I decided on Kenbishi “Mizuho” Yamahai Junmai Sake to drink while watching the series.

First, let’s talk about the Kenbishi sake brewery. Established in 1505 in Hyogo prefecture, Kenbishi is known as the first sake brewery to be branded in Japan. According to history, the Kenbishi sake was a favorite of samurai and on the eve of large battles, a barrel would be opened. Even the Kenbishi iconic diamond logo can be seen in drawings of samurai drinking from the barrels from the 16th century. And since Yasuke was reported to be a samurai during this time, he could have drunk from one of those Kenbishi barrels.

The “Mizuho” Yamahai Junmai is an aged sake. But before I begin describing the flavors and aroma of this sake, I need to explain what Yamahai and Junmai mean. Junmai is Japanese for pure rice. Basically, a sake that is classified as Junami means that it is made only with rice, water, koji and yeast. There are no additives like additional alcohol, sugar or flavors. Yamahai is a type of moto, aka yeast starter, used during the brewing process. Yamahai is created in a slow and tedious way that allows for more wild yeasts and bacteria to become part of the brew. This creates a bolder and richer sake with strong umami notes and higher acidity. The Yamahai method was created in 1909 and is related to the Kimoto method which has been used for centuries.

While this sake is brewed in traditional ways, the flavors and aromas are reminiscent of western and African cultures due to it being aged between five and eight years and the use of the Yamahai method. The flavors remind me of whiskey, cocoa, brown sugar and caramel with subtle fruity and sour notes. While most sake is clear, this one has a lovely light amber, yellow hue. Drinking for the first time is a pleasant surprise — just like learning about the story of Yasuke for the first time. You can drink this sake warm, but I recommend drinking it chilled with a nice grilled steak or portobello mushroom or even some raw oysters. You can order this sake from Oakland’s Umami Mart or Tippsy Sake.

The second sake I paired with Flying Lotus’s song “Between Memories,” featuring Niki Randa. The song appears on the soundtrack for the Yasuke anime. The song serves as the closing credits for the show. The track is mellow, textured and rich featuring the sultry and sweet vocals of Niki Randa. I paired this song with a sake called Tamagawa “Time Machine” 1712. You could call this the sake answer to an after-meal or dessert wine. A perfect sake to close out a lovely evening similar to the way this song closes out each episode of the show. This sake is made from a recipe recorded in 1712 and brewed by the first foreign-born toji aka brewmaster Phillip Harper. Harper and Yasuke share the notoriety of being the first foreign-born to master a Japanese tradition — one for brewing sake and the other becoming a samurai. The Tamagawa Brewery is also the only brewery in Japan to have a toji that is not Japanese.

The sake is mellow and textured just like the song with flavors and aromas of aged honey, toffee and sherry. It pairs wells with the sweet and wispy vocals of Niki Randa. Other umami notes like soy sauce balance out the sweetness. The sake is also a Junmai like the Kenbishi mentioned earlier, but instead of using the Yamahai method, it is made with the Kimoto method. This sake pairs well with desserts like ice cream. You can order this sake from True Sake, located in San Francisco.

The final sake pairing is for the Flying Lotus’ “Black Gold” featuring Thundercat. This track serves as the opening theme for Yasuke. The track feels bright and inspiring but grounded.  Since both Flying Lotus and Thundercat are from California, I decided that the sake should be, too. I decided to pair it with a sake from Oakland’s Den Sake Brewery.

Den Sake was founded in 2017 by toji Yoshihiro Sako and is the first sake brewery in Oakland. Not only is the sake made in California, but the rice they use is also grown in California as well. I selected their Den Blanc because of its brightness and citrus notes to match with the song’s brightness. The sake is a good one to begin a meal with just like “Black Gold” is the opening song for the show. You can order this sake from Oakland’s Umami Mart.