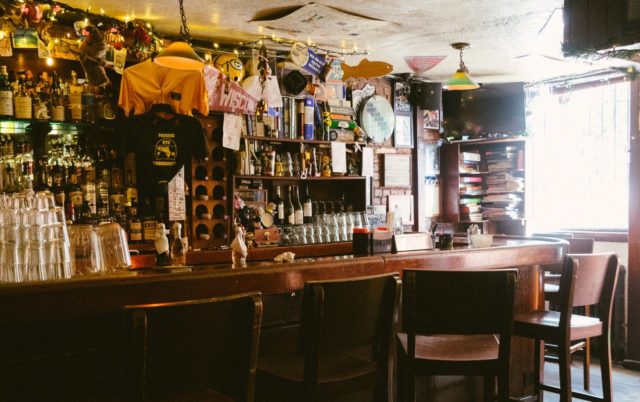 There is a bar in the middle of New York City that is like walking into Lambeau Field. It serves summer sausage and cheddar on paper plates, the patrons sing “The Bears Still Suck” every time the other team scores, and there’s a line around the block an hour before it opens on Packers game days.

The bar is so in-demand for Packer games that it has a punch card system. If you have attended enough Packer games during the season you qualify to be admitted during the playoffs.

The bar is Kettle of Fish. In the ’60s the beats drank there. There’s a famous picture of Jack Kerouac standing next to their bar sign. The bar appears in all of Bob Dylan’s and Patti Smith’s biographies. And it still has a book club.  But now it has become New York’s great Green Bay Packer bar.

“It started small,” Patrick Daley tells me in a thick Wisconsin accent. Daily was born in Tosa and last lived on Farwell just off North Avenue. In 1980 he moved to New York City and started tending bar at Kettle of Fish. He worked his way up and eventually bought the name of the bar. He moved it around a bit, but it is still in the heart of Greenwich Village.

In the late ’90s, Daley and his wife would watch games alone in the bar together. Then a guy passing by saw a Green Bay Packer pennant in the window and asked if he played the games. He came back again and brought friends. “And then it kind of blew up after that.”

Aaron Rodgers has even stopped by. Aaron Rodgers was in New York City, judging the Tribeca Film Festival. One of the organizers of the film festival is a huge Packer fan who watches the games at Kettle of Fish and brought Aaron Rodgers to the bar. He had so much fun there he cancelled his flight home to hang out at the bar longer. “He was a heck of a guy. Better than advertised. Confident but humble,” remembers Daley.

In line before a game you might see Milwaukee musician Abby Jeanne or Rush Mor Records owner Dan DuChaine, who both watched games there this year. On game day they serve Usinger’s sausage. “We get them shipped in every week,” Daley says. They sing “I Love My Green Bay Packers” after every Green Bay touchdown and even chant “Neenah, Neenah, where the hell is Neenah” during games. “It’s a party,” says Daily.

So next time you’re in NYC and you want a reminder of home, at Kettle of Fish there’s room for cheeseheads in the Big Apple.