Is this the Milwaukee Brewers’ new official logo?

Is this the Milwaukee Brewers’ new official logo? 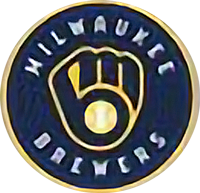 Since the team’s cruelly quick elimination from the post season this month, rumors have spread around Brewers Twitter that the team may be about to announce an update to its logo. And now, thanks to one eagle-eyed sports fan very prepared for this winter’s hot stove, we may have a blurry glimpse at that new logo.

Twitter user @Gord93 spotted what might be the team’s new logo on the bottom corner of a preview of a Topps baseball card featuring Bernie Brewer.

Let’s zoom in on this one a little bit.

It’s an update on an old favorite, the beloved ball and cap logo the team used between 1978 and 1994. The team has resurrected that logo quite often in recent years, both on merchandise and in games. The team wore the old logo in 52 games this season, according to SportsLogos.net.

In the new version the logo is navy, the baseball has two seams, the mitt looks a little different and there’s some extra lettering. But it’s basically the same idea.

It’s definitely more design-forward than the Brewers’ current logo, which the team has worn indifferently since 2000. They were probably overdue for an update.