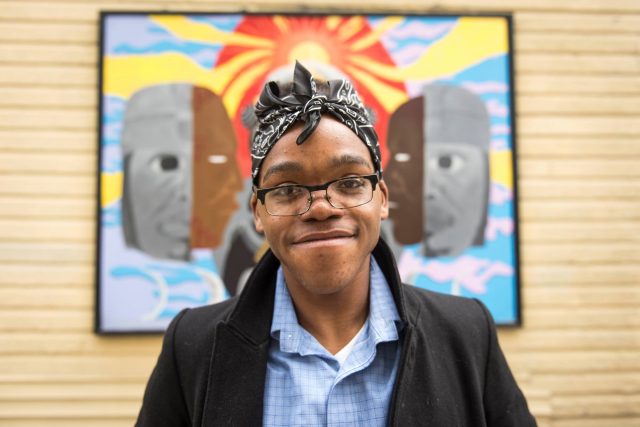 Kavon Cortez-Jones has sold over 200 copies of his first book of poetry, 'Club Noir.'

If you’ve spent time in the Riverwest neighborhood you’ll likely have run into Kavon Cortez-Jones, formerly “KJ Prodigy.” You might even call him a local celebrity.

The affable young scribe can often be found writing or reading at Fuel Cafe and Colectivo on Humboldt, riding his bike (though not in the winter), attending local concerts, marching in a protest, and performing at an open mic or poetry event.

On his 22nd birthday — September 26 — Cortez-Jones began selling his first book of poetry. He didn’t throw a big release party or get the books in stores. Instead, he kept copies in his backpack and slung them around town to friends and strangers alike. He has since sold over 200 copies.

This Friday, Cortez-Jones will be the event narrator at a holiday fundraiser event for Freespace, an all-ages, free, monthly, (mostly) hip-hop showcase founded by English teacher Vince Gaa and experimental hip-hop artist WebsterX (Sam Ahmed). [Read below for more.]

Kavon Cortez-Jones grew up in the Harambee and Bronzeville neighborhoods. His mother worked at the Black Holocaust Museum. Cortez-Jones attended Dr. Martin Luther King Jr. for elementary and middle school.

“When I was in seventh grade, our teacher Ms. Lacking pulled us all into the gym. We had no idea what was going on. There were two guys there, one was wearing an orange jumpsuit and the other one had a jump-rope,” Cortez-Jones told the Love Wisconsin Project.

“It turned out that they were poets, there to do a performance. Kwabena Nixon did a poem about the jump rope and how it’s a lost art, and Muhibb Dyer did a poem about how he lost one of his friends to gun violence. They made poetry look so cool to us. It blew my mind. I was 13 years old and I was like, ‘This is amazing. I want to do this now.’ That’s when I started writing passionately.” 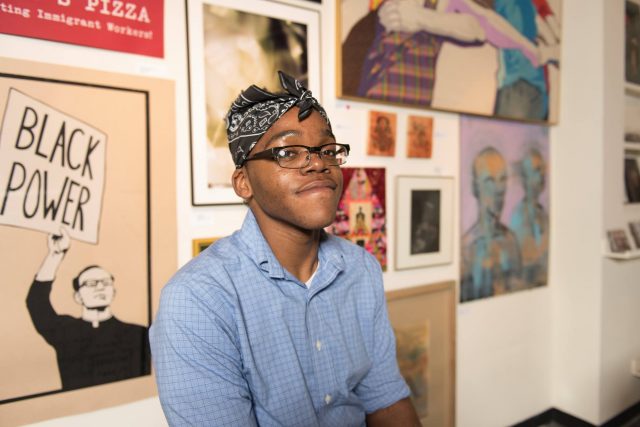 While he remembers writing before seeing Nixon and Dyer perform at his school, it was after this experience that Cortez-Jones began saving his composition books.

“I have 54 composition books now. It’s not just poetry, but anything and everything I was feeling at the moment. We were kind of not allowed to go outside and play because it was a bad neighborhood, I guess. So I was like, ‘I’m gonna write then,’” he recalls.

Cortez-Jones admits he wasn’t a great high school student, or at least he didn’t reach his potential. He was an introverted student, but still managed enough courage to join Riverside High School’s poetry club. Over the years he gained confidence and in his junior year Cortez-Jones performed for his entire school, in front of almost a thousand fellow students.

After graduating from high school Cortez-Jones began to explore Milwaukee. He got connected with the ACLU and a wide range of organizations and people. He has spent a few years discovering the city and has gotten to know many of Milwaukee’s characters. He likes that in Riverwest it feels as if everyone knows each other.

Founded in Minneapolis in 2011, Button Poetry is an organization that promotes modern poetry. Through their YouTube page Cortez-Jones has uncovered a large community of poets and discovered his favorite contemporary poet, Sarah Kay.

Since starting his career as a poet, Cortez-Jones has performed at local colleges including Alverno, Marquette, UWM, as well as art galleries, coffee shops, DIY punk venues, park gatherings and the like. At 19, he earned a spot on Wisconsin’s Brave New Voices team for a youth poetry summit in Philadelphia. This year he was invited to perform at UW-Green Bay’s Black History Month Celebration, Madison’s Olbrich Botanical Gardens, and was a keynote speaker at Lloyd Barbie Montessori School’s Peace Summit.

Cortez-Jones’ poetry is playful, powerful, and psychedelic. He is fond of references and has a penchant for personification. He describes his style as “cinematic poetry,” and his book’s title — “Club Noir” — is drawn from a poem of the same name that imagines a cafe/nightclub full of Black excellence located in the heart of our city, what Cortez-Jones calls the “Paris of the Midwest.”

“The writing process for me has become pretty easy, because I do it every day. I let the words sit on the page, then I come back after a little while. Then I’ll rearrange the words,” says Cortez-Jones.

“I go to the library a lot to get music. I know whatever I pick is going to have a huge influence on the way I feel and write. I listen to all sorts of stuff, from Jimi Hendrix to Bjork, Lupe Fiasco to Radiohead. My favorite rapper right now is Lil Dicky. He’s so funny and clever. I binge watched his videos the other week.”

When he got the idea to publish his first book of poetry, a friend connected Cortez-Jones with Paragon Printing & Graphics, located in Walker’s Point. It is the same local printing house that published a book by Dasha Kelly, one of Cortez-Jones’ mentors. A family-owned business, Paragon’s Bob and Tom Chirafisi — plus 31 GoFundMe donors — helped Cortez-Jones make his dream a reality.

Since he began selling the book Cortez-Jones’ best experience has been at a hip-hop show in Bay View at Puddler’s Hall.

“My friend Brandon Morn asked me to come out and do some poetry. Mike Regal recommended me to him. There was art up on the walls and the crowd was so diverse. Everyone was so receptive. It blew my mind. Most of the time when I perform people hardly even show up, but I sold ten books to a bunch of strangers that day.”

In addition to his regular poetry performances, Cortez-Jones is also a teaching artist with the Milwaukee Rep, a poet-in-residence at Artists Working in Education, a teaching artist at Still Waters Collective, and hopes to be with First Stage this Winter and Spring. He volunteers with students at Escuela Vieau in Walker’s Point and attends MATC. He plans to transfer to UWM. When he graduates Cortez-Jones will be the the first member of his family with a Bachelor’s Degree.

“I’d like to go on and get a Master’s Degree. I hope to teach art history or linguistics, be some kind of teaching artist. I feel like other influences and cross-disciplinary thinking can help make me a better poet,” says Cortez-Jones, who has started working on his second book of poetry.

Cortez-Jones feels it is only natural that he would give back to kids. He wants to inspire youth in the same way Kwabena Nixon and Muhibb Dyer inspired him and his classmates.

Over the years Cortez-Jones has benefited greatly from community support. For example, the current Narrator at The Pfister Hotel — Dominic Inouye — added “Club Noir” to the website Relevant Milwaukee, where you can order the book.

“For me the best times, better than any performance, are actually sitting down and talking with people. Just being human. Sometimes people want to come up to me and talk about poetry before actually saying ‘Hi,’ or asking my name. I’m a person before I’m a poet. That’s why I changed my poetry name from ‘KJ Prodigy’ to my full name. But you can still call me ‘KJ.’” 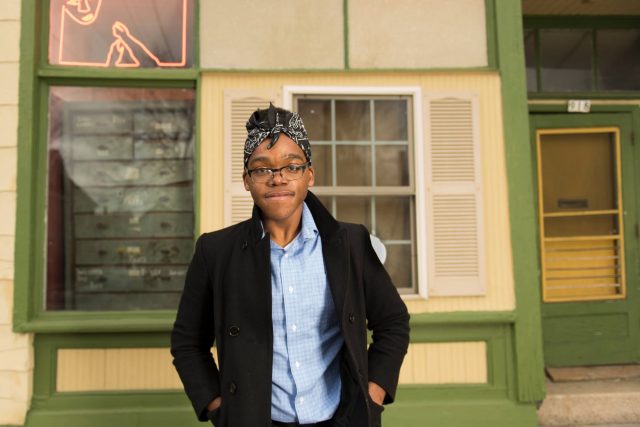 Kavon Cortez-Jones will be the event narrator at the Freespace Holiday Fundraiser on Friday December 23, at the Jazz Gallery Center for the Arts (926 E. Center Street). The event begins at 5:30 p.m. It is free but a donation is suggested. ‘Club Noir’ will be available for purchase at the event.