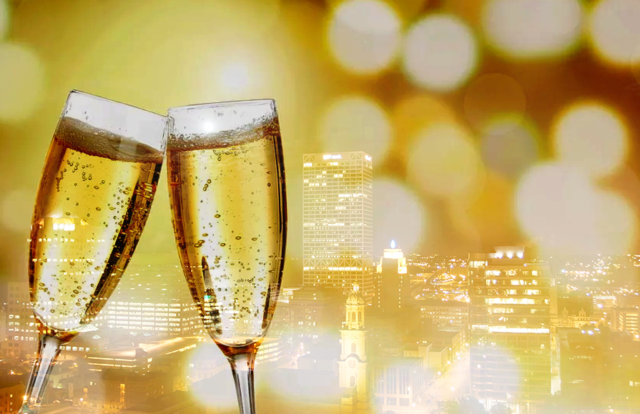 So long, 2019. 2020 is just around the corner, and between the presidential election, the Democratic National Convention and likely playoff appearances for at least a couple of Wisconsin’s finest sports steams, there’s a lot to look forward to. But first it’s time to celebrate the decade that was, and to send the 2010s off in style.

As always, Milwaukee welcomes the new year with an array of concerts, galas and gatherings, offering a night out for any budget. So put on your best shoes, leave your car keys at home and hope the surge pricing isn’t too intense, because it’s time to welcome a new decade. And if Uber or Lyft don’t work out for you, remember there’s always the bus: All Milwaukee County Transit System buses are free on Dec. 31 beginning at 8 p.m.

Budget cuts ended the city’s downtown New Year’s Eve fireworks years ago, but that hasn’t stopped delighted crowds from gathering each year at Red Arrow Park, where there will be ice skating and concessions, including hot chocolate. The rink will be open 10 a.m. to 1 a.m.

Fox & Branch will soundtrack this family-friendly party with some folk music, joining a bill that also includes magician Rick Allen and the fire dancers Prismatic Flame. There will also be face painting, balloon twisting, clowns, a light show and a dance party ahead of the 9 p.m. balloon drop.

For families who really want to get a jump on the day, the Betty Brinn museum hosts this morning of children’s activities — including party-hat making and noise-maker stations, ahead of a noon ball drop, toasted with juice and animal crackers.

Prepare to get “Sweet Georgia Brown” stuck in your head. The stunt-loving Harlem basketball team keeps will keep their decades-long streak of Dec. 31 appearances in Milwaukee alive with their return appearance to Fiserv Forum. “We have always been about our fans, but this year, everything we do will bring fans closer to the action more than ever before,” the team promises.

Milwaukee’s indoor soccer team doesn’t command the attention of some of the city’s other professional sports teams, but New Year’s Eve provides a plum opportunity for casual soccer fans to see what they’re all about. They’ve got something special lined up for the holiday, too: a halftime laser show.

Now here’s an efficient way to wear out the kids. Bounce Milwaukee is offering packages with unlimited laser tag, rock climbing, inflatable sports and obstacle courses and free-play on vintage arcade games, air-hockey and pinball. “You’ll also get access to our DJ and countdown, confetti cannon celebration, our champagne/sparkling juice toast, time capsule creation and more. We’ll even have a dedicated, professional photographer on-site for posed pictures and candid shots of you and your family,” according to he website. There will also be a generous buffet with ample dessert options.

Now that’s a lot of Milwaukee music. Two of the most popular Milwaukee acts of the ’00s and ’10s are joined by one of the scene’s current rising stars, opener Brett Newski, at this generous bill.

Bluegrass stars Greensky Bluegrass cap off three nights at the Riverside Theater with this main event, a New Year’s Eve bill where the band will perform three full sets.

The Oxleys will kick off this New Year’s eve lineup with music from 7-9 p.m., followed by sets from DJs Breezah and Mikey Fastlife. There will be a champagne bar and a midnight toast. Marathon partiers will be rewarded with a 4 a.m. breakfast bar.

The Docksiders will keep things smooth and mellow with a night of covers of the greatest sax-soaked yacht-rock hits.

ComedySportz always enjoys especially lively audiences at its annual New Year’s Eve matches. Admission includes free appetizers and unlimited soda and champagne. Both shows are family-friendly, and each will end with a countdown (at midnight for the late show, and 9:45 for the early show).

You can always count on Circle-A to get an early jump on the night. This bill runs from 7-11 p.m. and includes some heavy music from AluminumKnotEye and The Hullmen. From there you can head out somewhere else or stick around for music from DJ Lars.

Aficionados of all things ’80s, the New Wave cover band Radio Radio will soundtrack this party at the Pabst Milwaukee Brewery & Taproom, which will feature free appetizers and a midnight toast.

Milwaukee great DJ Bizzon holds down the turntables at this dance party. “The music will span from the ’70s all the way until now,” the Facebook event promises. “You’ll get some Earth, Wind & Fire, Prince and Whitney, mixed in with some Beyonce, Chance, Da Baby, Megan and more!” There will also be movies, a heated patio, a coat check and a midnight champagne toast.

You can’t beat this: Radio Milwaukee’s own DJ Kenny Perez, host of “In The Mix,” will be DJing this New Year’s Eve bash. Table reservations are available for those who want to live it up.

The Downtown dance club ELMNT is promising multiple DJs and special guests for its New Year’s Eve event, which will feature prizes and giveaways. The kitchen will be open, too.

DJ James Freshluggage returns for Mad Planet’s annual New Year’s Eve dance party, which promises a night of music from the ’70s and ’80s through the present. It’ll feature complimentary food and a champagne toast, and go deep into the morning.

Playing off of the Ambassador Hotel’s gleaming art-deco décor, the hotel’s Roaring ’20s New Year’s Eve party returns for its third year. There will be a speakeasy with gaming (and a TV as a prize), live music and dancing from the 11-piece band Southport Sound, and a midnight balloon drop and champagne toast. Overnight packages, including New Year’s Day brunch for two, are also available.

Ambassador’s isn’t the only ’20s-themed party in town this year. The 20/20 Club’s spin on the decade will feature craft cocktails, tacos from Mazorca, a champagne bar and music from DJ NOMAGIC!

Milwaukee’s beloved queer dance party heads to X-Ray Arcade for the first time for its first-ever New year’s Eve installment. “Our goal is to create a club space where all bodies are welcome and everyone can just relax and dance and have a fun and debaucherous time,” the promoters write, pledging to create a safe space. There’s no cover.

Expect plenty of fur coats at this themed ball. Four DJs will hold down the music. Cover is free before midnight; $5 after.

The first stretch of this marathon party at Site 1a features sets from JaeBea, BG GooD and Mr New York, as well as a midnight balloon drop, a champagne toast and photography from Weekend Natives.

Here’s an option for revelers who want to get an early start on the night. Bavarian Bierhaus celebrates Munich’s New Year at 5 p.m. with a menu of traditional German food and beer and music from Alpine Blast.

All-you-can-drink wristbands should ensure that things stay lively at this bash. There will be a DJ spinning a little bit of everything.

Milwaukee’s premier spy-themed bar pays homage to the world’s most famous fictional spy at this gala, which will feature a balloon drop and beer pong (we’re not sure we remember 007 playing beer pong in any of the movies, but we’ll just go with it). Bond not your thing? SafeHouse is also hosting a globally themed celebration called Cheers Around the World.

This EDM bill promises two rooms “of booming techno, house, drum n bass, and rave,” as well as a laser and light show and “underground aesthetics by Massive and SOAP.”