The Milwaukee Rep addresses identity on and off stage

The Milwaukee Rep addresses identity on and off stage 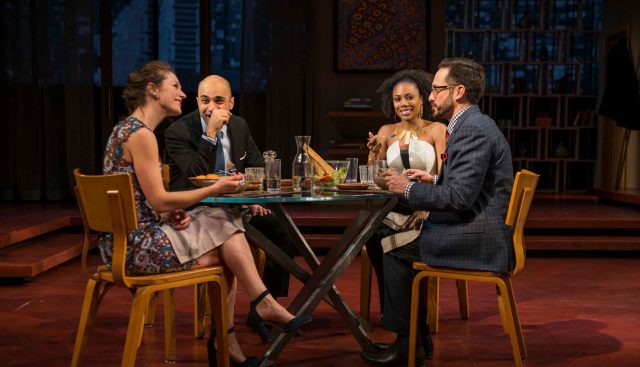 According to Leda Hoffmann, the Rep’s director of community engagement, the inspiration came from attending a discussion on privilege at the Zeidler Center.

The theater began the conversation with a simple fill-in-the-blank: “Let’s Talk Identity Because ___.” Here is how various artists at the Rep responded:

It’s no secret that discussions about identity politics are rare, and often avoided. Whether it’s at the family dinner table or at the bar with friends, it’s a topic many would rather tip-toe around.

Not so with the Milwaukee Repertory Theater. The Rep has begun to blow the doors wide open on the conversation with its new campaign, aptly titled “Talk Identity.”

With “Talk Identity,” the Rep is calling upon Milwaukeeans to partake in the discussion of identity, whether related to race, gender, religion or other characteristics.

The goal of “Talk Identity” is to create meaningful dialogue that increases understanding and empathy between members of our community. It strives to increase people’s knowledge of how identity affects people’s everyday lives through personal, local stories about identity.

The Rep is  encouraging participation through writing personal stories for its website, watching/reading the stories of others, using #talkidentity on social media or attending an event planned as part of this initiative.

The stories on their site give detailed accounts of the many ways in which different forms of identity have affected people’s lives, with perspectives ranging from a first generation Hmong-American woman to a former white supremacist.

The largest event taking place is the critically-acclaimed play Disgraced, running now through Feb. 20, along with panel discussions and an interview with the playwright at select performances.

Described as “A sparking and combustible contemporary drama” by Bloomberg, the Pulitzer Prize-winning Disgraced is centered around a Pakistani-American lawyer and his wife hosting a dinner party. This one-act play depicts an intense clash of different cultures as the discussion quickly escalates to issues of identity politics.

According to Hofmann, “Disgraced is gripping and intense. It’s an incredibly entertaining play about big ideas. It moves quickly, there’s an incredible pace to [playwright] Ayad Akhtar’s writing. There are years, centuries even, of ideas in the play and yet it is a fast paced 80 minutes with these ideas personally connected to the characters.

“One of the central axis points of the American experience is rupture from the old world, and renewal of the self in the new one. For seven or eight generations, this notion is central to being American. We celebrate the renewal, we do not mourn the rupture. Disgraced is about the gap which is created by not mourning the rupture,” says Ayad Akhtar, playwright of Disgraced.

Along with the performances is a lobby exhibition of “Many Faces | One Humanity,” a photograph series that, according to the event’s website, “celebrates human diversity and creates a universal connection.”

In addition, “Talk Identity” is removing the stigma of awkward dinner table conversations with “Intercultural Dinners,”  giving members of the community a safe haven to discuss topics of identity over food.

For more information on any events, personal written stories, tickets and more, go to www.talkidentity.com