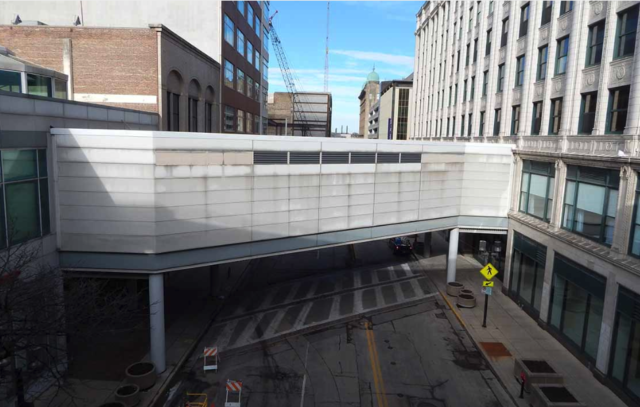 Milwaukee’s downtown Westown neighborhood is in store for some big upgrades in the coming months, as the neighborhood near the former Grand Avenue Mall readies itself for the opening of the 3rd Street Market Hall and the grand new Milwaukee Symphony Orchestra Center. And while the neighborhood prepares for those upgrades, it’s looking to spruce up some existing infrastructure, including the dreary 2nd Street pedestrian bridge that connects parking structures to those upcoming attractions.

The neighborhood is looking to add a mural to the south-facing exterior of that skywalk, and a big one at that. Milwaukee Downtown BID #21 has put out a request for submissions from local artists for a mural that would be roughly 92 feet wide by 15 feet high. Oh yeah: And the budget for the job is a whistle-worthy $25,000.

Interested artists have until Friday, Feb. 14 to apply. All the details you need to know are included in this request for proposals. The district is looking to move fast: Under the current timeline, the winner would be selected by March and the mural would be installed in May, with hopes of a ribbon cutting on June 1, with weeks to spare before the Democratic National Convention.

“Once complete, the 2nd Street skywalk mural will be part of the growing portfolio of public realm improvement projects led by Milwaukee Downtown, BID #21,” a press release reads. “To date, these projects include enhancements at Postman Square in 2019, and murals like ‘Heart & Sol’ by Mauricio Ramirez (2019), ‘Westown in Bloom’ by Emma Daisy Gertel (2019), ‘Migration’ by Katie Batten and Janson Rapisarda (2018) and over a dozen utility box murals throughout downtown by Mauricio Ramirez (2017 – 2019).”