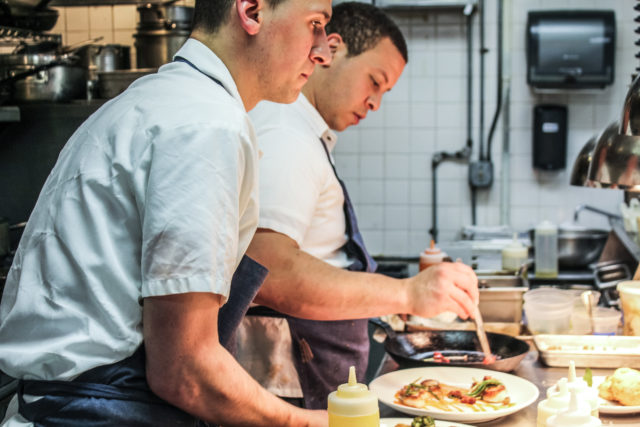 Milwaukee’s oldest cocktail lounge, the unsuspecting and dimly lit Bryant’s Cocktail Lounge known for its endless “menu” is nominated for Outstanding Bar Program for the second time. It was also 2013 semifinalist.

Then, for the third year in a row, The Bartolotta Restaurants are nominated for the Outstanding Restaurateur award. Chef Paul Bartolotta already holds two Beard awards, though they were for non-Milwaukee Restaurants—Spiaggia in Chicago and Ristorante di Mare in Las Vegas.

Chef Dane Baldwin (back) at The Diplomat

And this year, Milwaukee has three nominees for Best Chef Midwest. They are Dane Baldwin of The Diplomat, Karen Bell of Bavette La Boucherie and Daniel Jacobs and Dan Van Rite for their work at EsterEv (inside DanDan). This is the third nomination for Bell and the second for the DanDan duo. But this is Baldwin’s first nomination. And The Diplomat, which opened in 2017, is his first restaurant.

Jonny Hunter of Forequarter in Madison also got a mention as a Best Chef Midwest semifinalist.

Now, the semifinalists will be voted on by 600 judges from across the country to select the finalists in each category. Then, they will vote again to select the winners, which will be presented in May.

This morning, the James Beard Foundation released the 2019 semifinalists for its coveted culinary awards. Five Milwaukee nominees and two Madison chefs made the list.