Milwaukee’s Fear District is pretty fun, but is it scary?

Milwaukee’s Fear District is pretty fun, but is it scary? 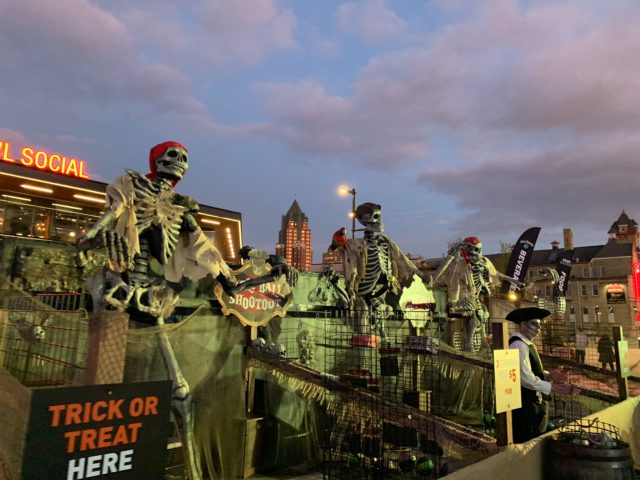 If you’re a Milwaukee resident looking to hit up a haunted house, you’re typically looking at a little bit of a drive. This year, however, Fiserv Forum’s Deer District brought three of them into the heart of downtown.

Through Nov. 3, Fiserv’s new Fear District features a carnival-style square and three haunted houses (a vampire-themed one, a pirate one, and a corn maze-style one called Scare Acres) in the plaza outside of the new Bucks arena. Entry into the plaza is free, but tickets for the haunted houses are $20 for adults and $15 for kids 12 and under or people 65 and older.

And because we’re suckers for all things Halloween, we had to try it. Radio Milwaukee’s Marcus Doucette, Justin Barney, Ayisha Jaffer, Kenny Perez, Lucas Seidel and Evan Rytlewski made the trek to the Fear District to see what they hype was all about, and find out whether these houses are worth the $20.

One big caveat before we share our opinions: We visited at about 6:30 p.m. on a Thursday in early October — not exactly prime time for a Halloween attraction. While we could imagine Fear District drawing some huge crowds on the weekends, attendance was understandably pretty thin during out visit, which may have shaped our impressions.

Evan: Alright, what did you all think? First impressions? Was it scary? Which house was the best?

Marcus: Not scary. This was not scary. It makes me wonder if I’m not seeing it for what it really is. Perhaps a bit deeper in the night, with more people? It’s easy to forget a haunted house is also a performance, and this audience was small. It had a decent amount or theatric panache but didn’t seem to be in full gear.

Kenny: The Fear District was nicely decorated, but it was a bit out shined by the bright lights and beauty of the buildings around it. The three haunted houses were short, dressed pretty spookily, and housed some cool props. The slimy rats in the Scare Acres house were nasty! I’d have to admit that I was bit startled a few times, but overall not very scary.

Lucas: As someone who has maybe gone to one or two haunted houses/Halloween-themed events before, I really didn’t know what to expect. In other words, I was probably more susceptible to being spooked than most and even I found it pretty tame.

The houses were definitely unnerving thanks to their themes and the performer’s unending commitment to keeping us on our toes but they weren’t necessarily scary. Whether that’s a good or bad thing I think depends on who you’re with and in our case, it seems that we all found it more “fun” than anything and that wasn’t necessarily a bad thing!

Justin: I will say one thing, the staff was INTO IT. We went early, it was light out, it was just after work. Things were pretty dead, and I found myself feeling bad for the staff who had to be decked out and in character he whole time. I mean, I would not be able to do that job, but they were ON. They were in character, they were in scare mode even when it was most difficult to do. Hats off to them.

Ayisha: I’m a frequent flier at haunted houses and I would say these are not scary at all. For me they were kind of mini-sampler haunted houses, just quick and done. They had some quick and clever ideas (like the never-ending velvet maze) but some missed opportunities for big scares as well. Maybe not enough actors? I’m not sure if this was the intention but maybe it’s geared more towards families with pre-teen ages and older to go through together which is why it’s not too scary and kind of quick. Either way, not scary, very short, and wouldn’t recommend. I liked the Scare Acres one the best out of the three.

Evan: Yeah, I’ve been to some incredibly creative, genuinely terrifying haunted houses around Southeastern Wisconsin and these… were not those. I think there’s a reason the best haunted houses are set in roomy, rural expanses and not cramped urban corridors: There just wasn’t space for these flimsy houses to do much. And the open-air layout of the rooms didn’t do the scares any favors, either. This was not “Midsommar;” daylight did not add to the terror.

So the houses were kind of lame. What did you all think of the rest of the grounds (the free areas)? Was there enough there to hold your attention? The Deer District has a huge hit on its hands with its winter Christkindlmarket; can it repeat that success with Fear District?

Lucas: There weren’t enough carnival games to warrant it being a standalone carnival, and not enough drinks to warrant it being a place to hang out and try some drinks. If I went there JUST to enjoy what’s outside of the houses, I’d be disappointed, but if I was simply in the area and passed through, it’d be charming enough. If it wants to become a mainstay, I think it needs to add something to keep you around and coming back. Maybe some musical acts or DJ sets? Some rotating food vendors? Face painting? I’m not really sure but something was missing.

Ayisha: I thought the setting was nice enough to hang out in. Lots of characters pushing drinks etc. (Pirates are perfect for that.) I folded for some cider because I’m a child. Like Justin, I also was down with the very friendly, complimenting staff. Family friendly and a great ego boost.

Marcus: I will say this, I would definitely bring the little guy to this. I like that it’s kid friendly with adult perks.

Kenny: The basketball game with the skulls was the highlight of the evening, because Justin Barney hit all three shots on the first try! I can see this really working well for families with younger children.

Justin: When I went three for three on the basketball game a security guard yelled, “Give this man a contract!” so I’m still flattered.

Lucas: I thought there would be some Bucks themed stuff but besides the skull basketball game and the merch, I don’t think there was anything (unless you all noticed something). I mean, if you’re gonna call it the “Fear District,” I wish there would have been some inversion of the Bucks iconography. Like c’mon, no ZOMBIE DEER?

Justin: I am also a BABY at haunted houses. I don’t go to many because I don’t enjoy being afraid. What is wrong with y’all, why do you crave this? So, as a person that isn’t looking to be traumatized for the rest of my life I found it perfectly fun.

Lucas: It’s just that adrenaline rush, man. Being able to be afraid but knowing you’re not in any REAL danger is fun. But I think that’s a fine line that’s different for everyone so if it was more in line with what you’re looking for. I don’t know if we’re the right crowd.