Missing the Bucks and Brewers? Here’s how you can rep both teams in Animal Crossing: New Horizons

Missing the Bucks and Brewers? Here’s how you can rep both teams in Animal Crossing: New Horizons 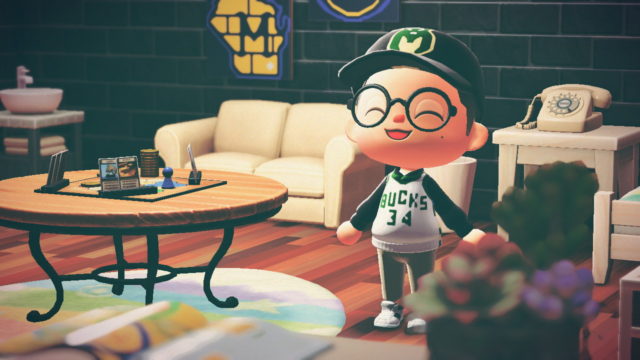 Although past games in the social life-simulating “Animal Crossing” series have been successful, making it one of Nintendo’s most well-known and beloved franchises, no game in the series has really captured the cultural zeitgeist quite like the latest entry: “Animal Crossing: New Horizons.”

Obviously, this is due in large part to its release during a time where people are staying inside due to quarantine, but it is also only playable on the ever-popular Nintendo Switch console and the first mainline game in the series to be released during the age where sharing your experience with a game through social media is the norm (the previous entry, “New Leaf,” was released in 2012). Thus, not only is everyone seemingly playing this game, but they’re all sharing their journey with one another constantly during a time where social connecting is more important than ever.

One of the easiest ways to connect with other players in this way is by sharing custom designs created through an in-game pixel art tool. Utilizing a kiosk within an in-game clothing shop, players can upload their designs online and other players can download them to display across their own personal towns and even wear the designs on clothing. This is made easier by the Switch’s built in Twitter functionality which allows players to tweet screenshots of their creations from the game.

Given how much I miss seeing the Brewers and Bucks play right now, it was only natural for me to use this tool to create designs based around these two teams and share them with other Milwaukee sports fans who are feeling the same baseball/basketball-sized hole in their heart during this pandemic.

To download the designs for yourself, you need to have unlocked the Able Sisters clothing shop which, while not difficult, does take a while to do so. Once the hedgehog-run shop is open, a kiosk can be found at the back of the shop from which you can input either “Design” or “Creator” ID numbers to download any design another player has uploaded. You can also upload your own designs here. My creator ID is MA-5523-8449-1665.

Since the game launched nearly three weeks ago, I have already sunk close to 50 hours into it and the “Custom Design” feature is a large reason why. I can’t help but turn every idea I have into a cute, pixel-y design to rep Milwaukee on my far-off virtual island of “Liloh.” I hope that these designs can help you do the same on your island or maybe inspire you to create something of your own during times like these where things like seeing some friends wear a Giannis jersey on the beach seem far off.