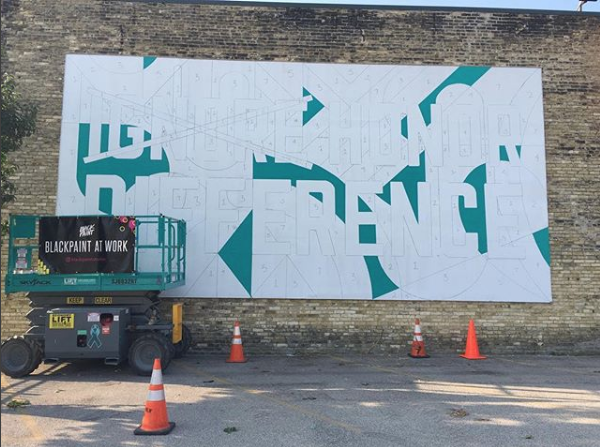 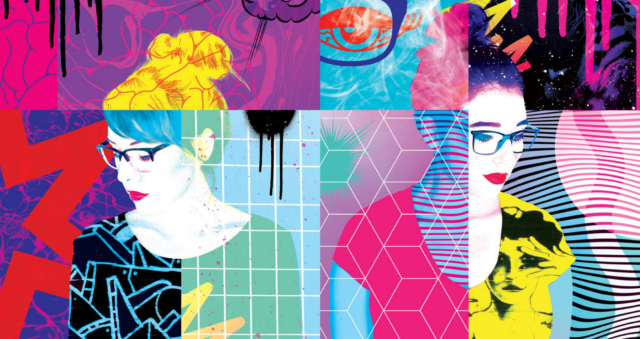 Milwaukee is getting a little brighter. Radio Milwaukee has teamed up with local artists to create two murals in the city.

The first mural is complete and the second, by Black Paint Studios, is now in progress in Walker’s Point on the side of Var Gallery 643 S 2nd St!

Get to know the artists behind the new mural below:

Black Paint Studios is Katie Mullen and Jordan Pintar. The two stopped by the Radio Milwaukee studio to talk about their background and vision for the second Radio Milwaukee commissioned mural.

How did you get into art?

Jordan Pintar: Originally, I was a film photographer, in high school. I was going to go to school for that at MIAD, but when I got there I realized it was a dying art form so I picked a major that was more money-making so I went into design. I had never done anything with graphic arts before MIAD and it was learning as you go. I didn’t have a typical fine art background when I was younger or anything. It was more discovery in college.

Katie Mullen: My grandma was an artist, there are many artists in my family. I feel like I’m an at-birth artist. I thought that meant I should be an art major in college. I started at UWM in Fine Arts. I pretty quickly switched to Journalism because I always love writing. I tried Graphic Design in between, I took a graphic design course and my fine arts did not translate into graphic design at all. Between the two of us, Jordan is the design side, but I still paint. I didn’t get a degree, I am not a technically trained painter, I am really self-taught.

We realized working together we produced some of the freshest, most meaningful work we had ever done and at the same time we realized we were on the same page; being really tired of the lack of female creative leadership and old-school office cultures that really defined our industry

How did you meet? How did Black Paint come together?

KM: Jordan and I met at an ad agency in Milwaukee. I worked in the advertising agency for about a decade. Jordan was one year into her career as a designer. We realized working together we produced some of the freshest, most meaningful work we had ever done and at the same time we also realized we were on the same page; being really tired of the lack of female creative leadership and old-school office cultures that really defined our industry. When I say “our industry,” I mean the design and advertising side of what we were doing at that time. Jordan quit without a plan and I quit the same week for similar reasons and we just decided that rather than drop out of our industry, if we wanted better for women and young people in the industry, it was on us to do something about it. We met Dr. Jean Grow from Marquette University who studied gender in Advertising for 20 years around the world, and she confirmed all of our greatest fears. The industry is really slow to progress compared to other industries, it’s a real issue. Thinks have to change; it’s like Mad Men still. Unfortunately, it really is.

So, we started freelancing for awhile and then decided to make ourselves official and we formed Black Paint Studios a few months after that.

JP: Honestly, it was really hard at first. You’re used to having office hours; you get to the office and nine o’clock, and you work until five, you do this and you do that. When you don’t have that, you have to really dig deep for that self-motivation. That was not natural at first. We started working in Katie’s dining room. I don’t even know if we had set hours, “come over at ten-ish” and we’d figure out what our day was going to be like. It’s a lot harder than it might seem from the outside. It didn’t come naturally to us. It was hard. We were not happy the first few months of our business starting out, it also makes you hungrier and have to work harder because you have nothing. It’s a good way to get a kick in the butt to get started, but the struggle was really, really, real for awhile.

KM: Before we got our first big contract we were in panic mode. I think panic mode is an important stage to go through, it keeps the fire under your ass lit. It keeps you motivated. “Am I going to eat next month?”

What is the mission of Black Paint?

KM: The mission is way more about changing our industry than the work that we do. We want to do great, ground-breaking work to show off that women are at the same level creatively or higher. The 11% of women who are Creative Directors in our industry is not representative of the talent that is out there. That is one part of business. The work and being proud of what we do is one side, but then we have what we call the “covert mission”, which is why we started the business and that is to increase the number of women and people of color in creative leadership roles at agencies.

How are you making that mission happen?

KM: There are a couple of ways we make the mission happen. We do self-directed projects that are centered around cultural commentary; like calling out issues in our industry, and we also have our client work.

Our Boss Lady project is one of those self-directed projects. We do a lot of that work Guerrilla Girls style. We work with other women and creatives in Milwaukee to call awareness to the issues in our industry. As far as nurturing that next generation of creative leaders, we have a formal paid internship program. We’ve had six interns since we started. It’s really centered around entrepreneurship, developing leaders instead of unquestioning worker bees in our industry. Those two things are the main two things; internships and Boss Lady. If we ever need freelancers like if we ever need video work or animation we have a crew of women freelancers or women who own businesses like we do that we partner with all the time.

JP: It feels good to give them the opportunity and to spread the love.

What inspired you to apply for the Radio Milwaukee mural project?

KM: We were interested in applying for the Radio Milwaukee mural because we had this peripheral relationship with Radio Milwaukee for awhile, though not directly. We’ve brought our interns to the station to talk to women in creative leadership in your side of the house in radio and we have lots of great relationships with people here in other ways. All these ways we’ve been connected to you guys.

We love and connect with your mission – how it’s more than the work you do, too. It’s beyond great radio which you all do. Like producing great graphic on our side of things, but we have the Boss Lady project. You have a mission to bring the community together. We really connect with having an arts-based output, but having the mission be something about making the community better and making things better for young people, women of color, and everyone.

What is your vision for the 88Nine mural?

JP: A lot of the work we do especially with murals is abstract. We want to be more intentional with this one and we have a message of Community and Listening.

You can view the progress at 643 S. 2nd Street in Walker’s Point.