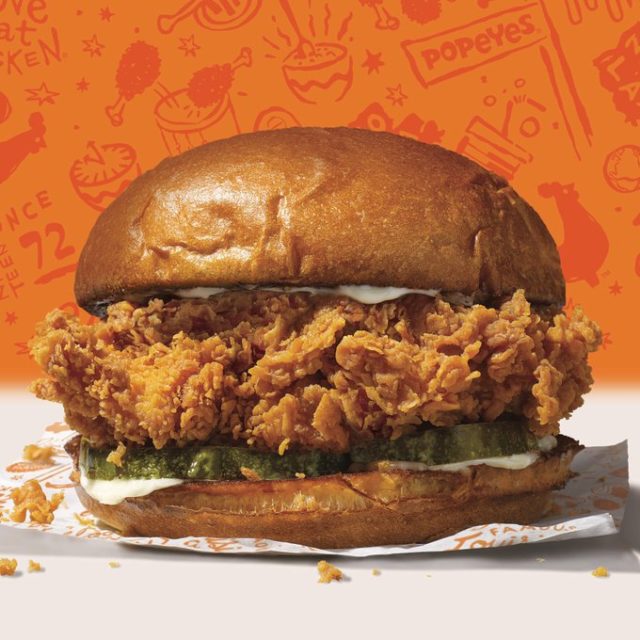 Chicken sandwiches may be the most commonplace thing in the world, but never underestimate the lengths people will go to for a good one — as evidenced by the troves of Chick-fil-A customers who abhor the chain’s politics yet still sneak a meal there from time to time.

So when word spread this month that Popeyes is now offering a comparable sandwich that’s purportedly as good but that won’t make you feel like you’ve taken a knife to your core values after eating it, social media lit up with a level of excitement usually reserved for new Avengers movies or White Claw memes. And while we’re happy to report that the sandwich is as good as its hyped to be, be prepared if you’re heading out to get one: You may be in store for a headache.

Twitter is filled with anecdotal accounts from around the country of long waits for the sandwich and shortages, and on a trip to sample one at the Popeyes location on 16th and National Avenue, we experienced both.

Although it was about 1:30 p.m., a little after the lunchtime rush at most restaurants, a long line snaked around the restaurant’s cramped lobby and out the door. Twice the cashier loudly announced that the restaurant was sold out of the chicken sandwiches, only to be corrected by a co-worker. He apologized, explaining the the restaurant runs out of the sandwiches so regularly he can’t keep up with when they do and don’t have them.

It took about a half hour to complete the order, and although it was a headache, it was also sort of fun in the way that standing in line for concert tickets can be, as customers chatted and gossiped about the sandwich’s popularity. A few marveled at how just weeks ago this same Popeyes location was virtually dead. A couple contrarians rolled their eyes, wondering what the hype was about. A chicken sandwich is a chicken sandwich, they insisted.

As far as fast-food chicken sandwiches go, though — especially ones at a $4 price point — they don’t get much better than this. I opted for the spicy variety, and it was aggressively seasoned with just the right amount of heat, more pronounced tingle than angry burn. The breading was salty and crunchy, offsetting the squishiness of the eggy, brioche-style bun, which itself had a slightly toasted texture.

Was it worth the hassle? No, not really. Wendy’s offers a not-quite-as-good spicy chicken sandwich that still gets the job done and will cost you only a fraction of the time, plus there’s no risk of walking away empty handed. And if you’re really looking to level up, Company Brewing, Palomino and Foxfire offer better, more foodie-friendly chicken sandwiches without the stigma of fast food. If you’ve got a craving, you might as well go all in.

And yet there’s something to be said for buying into the hype sometimes. In a few weeks, the world will have mostly forgotten about Popeyes’ chicken sandwich, and the lines will have died down. You could go then. But where’s the fun in that? You could wait until the new Marvel movie is streaming on Netflix, too, but that’s not nearly as exciting as going on opening weekend, is it? The real secret ingredient of Popeyes’ chicken sandwich isn’t the spice. It’s the inconvenience.