Power of a message: Have Goals, Milwaukee

Power of a message: Have Goals, Milwaukee 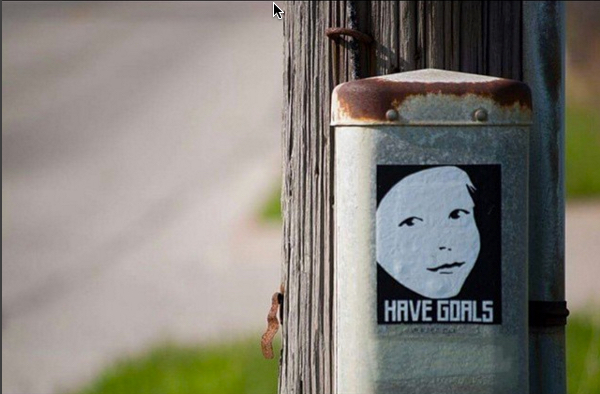 A blue newspaper box on the corner of Highway 100 and Bluemound. The back of a street sign on Brady and Farwell. An electrical box on Humboldt.

These are only three of the thousands of sites displaying a familiar piece of Milwaukee street art — a black and white sticker that says, “Have Goals.”

The sticker was created by a man inspired by the same phrase he saw spray-painted on the side of a slowing train during a business trip, far from home. A man who prefers to keep his identity secret. We will refer to him as Have Goals.

“The message and the style of the type is so easy to interpret. You can’t look at it and not read the entire message. It’s a complete sentence: two words, nine letters,” he said.

At first it was something for him — a daily reminder placed near a left turn lane or halfway up a light pole. He put the stickers where he would see them often. To encourage him to continue on his own path.

“It kept me going. You know how life is, with problems you have. Anything you can do to drive yourself forward is useful and this was useful to me,” Have Goals said.

Eventually, Milwaukee started to notice. A few years ago, someone started a Facebook page “Have Goals, Milwaukee.” People posted sightings of the sticker along with testimonials of what it meant to them.

Have Goals soon started to realize the art he made for himself also meant something significant to strangers.

“I’ve heard some amazing stories from people,” he said, including one from a woman who thought the person in the sticker looked like her. (It’s actually an image of Have Goals’ daughter.) “And that’s what made her set these goals in her life — that she really achieved, and they’re pretty unbelievable. Her ‘before’ and ‘after is like astonishing.

“Someone just grabbing the controls of their own life and making it be the thing that they want it to be. And then coming to me — finding me and telling me, ‘It’s because I saw this thing you put up.’”

Although he is no psychologist or “goals master,” as he puts it, Have Goals gives advice by drawing from his own experiences and what the sticker means to him.

“Having this piece of art to centralize the idea of remembering like, ‘Hey, just remember what you are doing here.’ Because in my personal life, the biggest problem I faced as a young man was getting knocked off the path.”

“ ‘Am I doing the thing that I’m picking?’ In life you’re constantly choosing your path. Someone’s making your choices and hopefully it’s you,” he said.

Along with four to five thousand stickers across Milwaukee and surrounding cities, Have Goals’ street art can be seen in almost every state in the U.S. — even in France, Japan and Russia.

No matter the audience, the message remains the same.

“It reminds me to stay on the path of what I’m choosing to do. Like, your goals are up to you. This sticker is about you. It’s whatever you want. Don’t forget about that.”

the street artist behind the sticker shares his inspiration