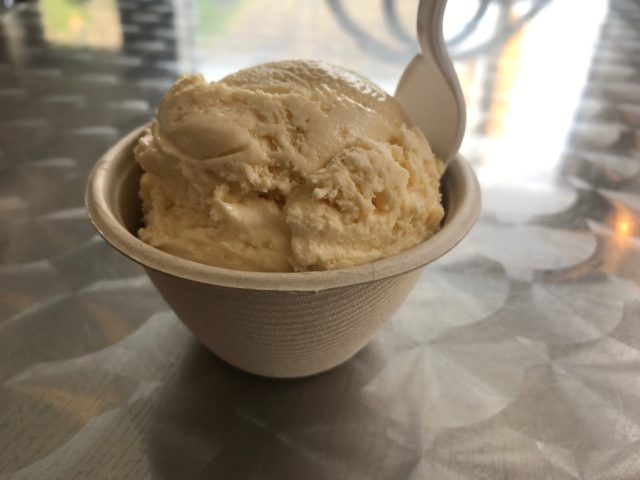 Mango. Cayenne. It’s a classic flavor combination, and a staple of every popsicle vendor worth their salt. And now thanks to some enterprising Bay View High School students, it’s also a local ice cream flavor.

For the next week or so — or until stock runs out — Purple Door Ice Cream will be serving a spicy mango ice cream based on the winning recipe from an ice cream competition that pit Milwaukee Public Schools’ four culinary schools against each other. Called “Bango Helado Con Chamoy,” the flavor promises a blend of mango, beet purée, cayenne pepper, lime juice and brown sugar. And since it’s hot outside — and since it sounds delicious — we had to try it.

The ice cream is as refreshing as it sounds: as creamy as a scoop of classic vanilla, but fruity like a sorbet. The heat is pronounced enough to declare itself on the first bite, but not so overpowering that it catches in the throat (the creamy dairy helps soothe the mild tingling).

And the beet purée is barely noticeable, which we’re not complaining about. There’s no purple hue; the ice cream looks to be roughly the color of french vanilla at first glance, until you look closer and notice the tiny flecks of red spice. Here’s hoping Purple Door decides to re-up after this first batch runs out, because this is a treat we could eat all summer.