Searching for the perfect shrimp and grits recipe? Look no further

Searching for the perfect shrimp and grits recipe? Look no further 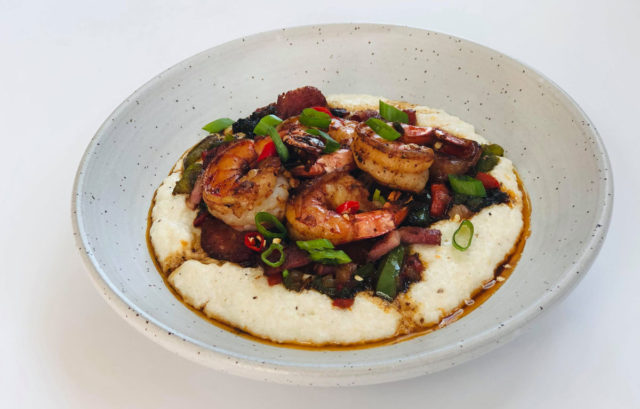 I’m so excited to share this week’s recipe and playlist from my sister from another mother, LaCrosse’s Chef Adrian Lipscombe. This week’s dish is close to my heart — shrimp and grits, a true Southern favorite.

Before, I share this recipe, you must know the key to shrimp and grits is the grits. I suggest using good quality grits. My preference is grits from Anson Mills. Their grits are rich and creamy and you can taste the corn. Also, if you can get them, I also recommend using gulf shrimp. You can usually find some at Milwaukee’s Empire Fish Market, who are currently doing curbside and taking delivery orders. And not to be biased, but if you have a little Southern blood like Adrian and myself, it will make the dish even better.

“There are, many collaborations that just work, like peanut butter and jelly to chocolate and caramel, but one of my favorite collaborations is shrimp and grits. Shrimp and grits are versatile and there is no limitation to flavors you can add to it. They could be served breakfast, lunch or dinner. Grits are controversial grain due to how they can be cooked.

There are definitely lines drawn in the sand whether you like your grits sweet or salty or with milk or water. I find I enjoy grits more if they are slow-cooked, not instant, salty and with milk and water, bonus if there is cream and lots of butter. The shrimp plays just as an important role in this dish as grits do.

There are many ways of cooking shrimp that varies from blackened to being cooked with gravy. Shrimp elevates grits from a side dish to a full meal. There is no argument that shrimp and grits are a Southern specialty that has many variations, but one thing I know is that they are all good in their own way.

So my music selections this week are based on great artist collaborations that stand the testament of time.”