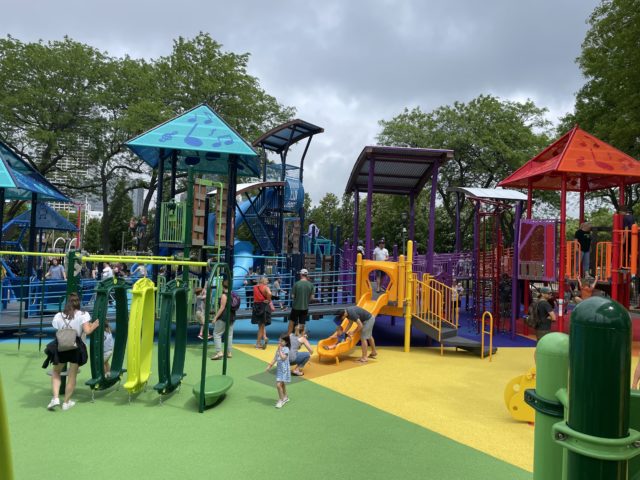 I must have always understood that playgrounds were important, but it wasn’t until I became a dad that I fully grasped just how indispensable they are for many families. Being a parent of a restless toddler means almost daily trips to the nearest playground, along with special trips to further-away playgrounds on the weekends. Playgrounds begin to occupy the space in your life that had once been dedicated to pre-parental concerns: bars, movie theaters, the ballpark. It’s hard to imagine how we’d survive the week without them.

Hence the excitement for the grand new playground unveiled at the Summerfest grounds this month, Northwestern Mutual Community Park. It’s a rarity: a true destination playground in downtown Milwaukee (a part of the city that hardly has any playgrounds at all), and it’s easily one of the biggest in the county, with multiple play areas for kids of different ages and capabilities. The grounds are wheelchair accessible, thanks to abundant ramps and a thoughtfully spacious layout, and include three sensory rooms for kids who need quiet spaces. There’s even shaded picnic seating, which may sound like a small touch but as any parents who’s ever baked in the sun at other playgrounds knows is inexplicably rare.

The playground will be open during Summerfest and other ethnic festivals. It’s also open for free to the public on weekdays from noon-4 p.m. and on Saturday and Sundays from 10 a.m. to 4 p.m. — but not for very long. This year its season only runs through Aug. 1, which leaves a lot of prime summer weeks off the calendar. (Asked why the playground’s season is so short, a representative from Summerfest responded “It’s because of the events and load in and load out – we can’t have it open with event traffic, due to safety concerns.”)

If those limited hours are a little disappointing, the playground itself is anything but. As a parent, you start to realize after you’ve been to enough of them that most playgrounds are more or less the same. Even the good ones are mostly made up of different permutations of the same slides, swings, teeter totters and steering wheels that don’t actually steer anything.

But Summerfest’s new playground really is something special. Playing off the Summerfest grounds’ music motifs, the playground is filled with interactive musical instruments, various xylophone-like metal bars and pipes of all sizes, along with towering climbing structures for older kids. Even the most traveled kid is likely to see some equipment they’ve never encountered before.

If there was any doubt about the demand for a playground like this, given the scarcity of young families that live downtown, this weekend put it to rest. This Sunday morning, despite periodic rain showers, the playground had already drawn about 300 people by 11 a.m. During my visit about a hundred children zipped around the playground at any given time, though the grounds were big enough to comfortably absorb the all those kids and the adults shadowing them.

The instant popularity of Northwestern Mutual Community Park has been great to see although for most parents it shouldn’t come as a surprise. They already know that a baller playground is worth traveling for.