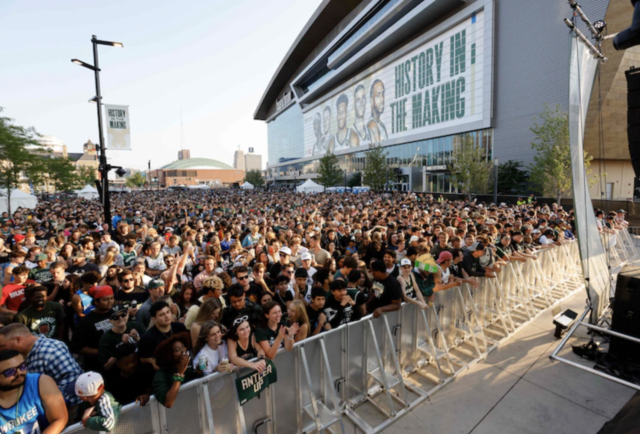 One of the biggest stories of the NBA Finals has been Milwaukee’s Deer District, and the ever-growing crowds that the plaza outside of Fiserv Forum has attracted for each game. With the Milwaukee Bucks set to host Game 6 of the Finals on Tuesday — and potentially fulfill their long-prophesied “Bucks in Six” victory — the Deer District is now preparing to host a larger crowd than anybody could have imagined at the start of the season.

This afternoon the team announced that it is expanding the Deer District to host up to 65,000 fans Tuesday night (yes, you read that right).

Here’s everything you need to know about the change, according to the team.

“The watch party will then stretch back across Juneau Ave., which will be closed between Sixth St. and Old World Third St., and continue onto the plaza at Fiserv Forum. Vel R. Phillips Ave. will also be closed between McKinley Ave. and Juneau Ave. Additional viewing screens will be setup on the plaza.”

“Gates to the Deer District watch party will open at 6 p.m. CT. Fans planning to attend the watch party in Deer District are encouraged to RSVP at www.bucks.com/playoffs to receive the most up-to-date information and guidance.”

It goes without saying that Milwaukeeans should expect some seriously heavy traffic on Tuesday night, and that ticketholders for the game should try to arrive early.