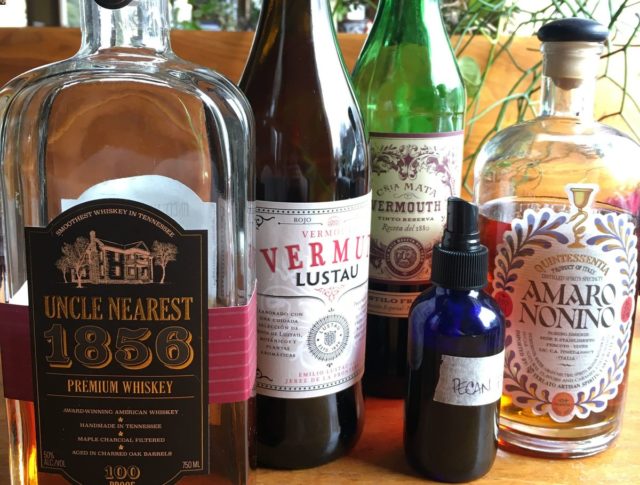 Some of you might know that I’m a huge fan of bourbon. I’m also a member of the Black Bourbon Society, an organization that bridges the gap between the spirits industry and African-American bourbon enthusiasts.

During this past, Black History Month, the Black Bourbon Society created a campaign called #TheBlackManhattanProject.

According to the website, #TheBlackManhattanProject is a month-long hashtag campaign raising awareness around the need for diversity and inclusion within the spirits industry. Rallying around the theme of the Black Manhattan Cocktail during the month of February (Black History Month), our partners Michter’s and Branca USA have dedicated $20,000 to support our nonprofit organization, DiversityDistilled.

DiversityDistilled advises, advocates and crafts unique strategies to address the Diversity, Equity and Inclusion of brands — with a focus on the world of distilled spirits, packaged beverages and the alcohol and service industries. By assessing the corporate and organizational structures, we discover opportunities for brands to be more inclusive.

The campaign also encourages members of the Black Bourbon Society to create their own take on the cocktail and share it on social media with the hashtag.

I decided to share the news of this campaign on my Facebook profile. Shortly after that post, Goodkind co-owner Katie Rose reached out about doing a collaboration to create a riff on the Black Manhattan. We also decided that the profits from the cocktail should benefit Milwaukee’s Upstart Kitchen. Upstart Kitchen is Milwaukee’s first incubator kitchen located in the Sherman Park neighborhood. Their mission is to provide local food entrepreneurs access to an affordable, fully equipped commercial kitchen & business resources to grow or start their own food business.

Within a few days, I was at Goodkind brainstorming with Katie on our take on this cocktail. We decided to use Uncle Nearest’s 1856 Premium Whiskey as the foundation instead of a bourbon, which traditionally used in a Black Manhattan.

For those who aren’t familiar with Uncle Nearest, it is a whiskey brand started and owned by Fawn Weaver, a Black woman. The whiskey takes its namesake from the first known African-American master distiller, Nathan “Nearest” Green.

Then Katie used two types of vermouth and amaro called Amaro Nonino, which both happen to be favories. Then a few dashes of Bittercube Trinity bitters were added. But what makes this Black Manhattan truly special was the house-made pecan tincture, which was inspired by my love of pecans and spending time under a pecan tree at my grandparents’ home in Alabama when I was young.

“I just had fun hanging out and collaborating and ultimately, the end result included a delicious cocktail and the ability to help some helpers. There’s not a lot of joy in my career right now and this was really joyful.”

The cocktail is now available on Goodkind’s menu and don’t forget the profits are donated to Upstart Kitchen. In case you would like to know the recipe, Katie shared it with me.

Stir / Strain
Serve up or over a large format ice cube