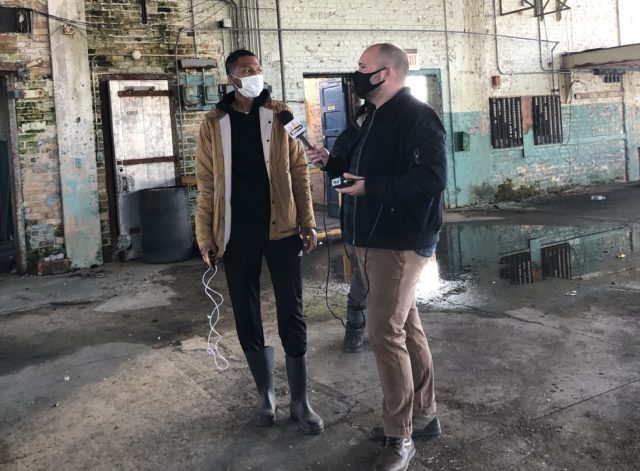 Have you ever looked at an old, vacant building and imagined what it could be fixed up? Perhaps you thought it could be something you felt your neighborhood needed or a cool place to hang out.

Que El-Amin and Rayhanio “Ray Nitti” Boynes are transforming the old Briggs and Stratton building on 32nd and Center into a housing and community center. Que is a real estate developer and Ray Nitti is a partner along with the creative and political consultant.

Ray Nitti says that people have expressed hope for the project.

“Especially the neighbors that live on 33rd Street side, you get a lot of them talking about the excitement, like, ‘Oh I’ve been here for 10 years and we’ve been waiting for somebody to do something with this building!’” he says. “Or they talk about what this building attracts. ‘Oh, the kids are always throwing rocks and breaking the windows over there.’ So they’re excited to see some different energy happening with this space. I’m just excited to see what comes out of it.”

A while back members of 88Nine’s team joined Ray Nitti and Que on a tour of the old Briggs and Stratton building on 32nd and Center. The project is a $60 million dollar investment.

Ray Nitti says that he sees the upcoming site as a means of keeping homegrown talent in the city as it’s an investment into the areas that get overlooked.

“The narrative has been that you have to leave Milwaukee to obtain a level of success to thrive as an artist, and there’s nothing further from the truth that Milwaukee lacks resources and platforms,” says Ray Nitti. “We have historically allocated and distributed these resources and platforms a certain way so certain sectors of Milwaukee are not included or are often skipped over.”

They’re building basketball courts and chess spots for communal action and a playground for the kids.

Ray Nitti says that when the Briggs and Stratton building became vacant it affected the surrounding neighborhood.

“As you can see we are on 32nd Center Street,” says Ray Nitti. “When Briggs and Stratton left this neighborhood so did a lot of things as well, money, jobs — you started seeing houses being torn down. We’re looking at the community within a corridor as something to revitalize the neighborhood, bring that energy back, bring creativity back. Encourage our creative community in the city to use their talents to help better the neighborhood around it.”

The development has been four years in the making thus far. Que El-Amin says that the potential outcome of it is something that adds pressure but he’s looking forward to the completed project.

“We put a lot of time and effort into it,” says Que. “It’s a huge responsibility, but it does feel good that it’s in people’s hands that care.”