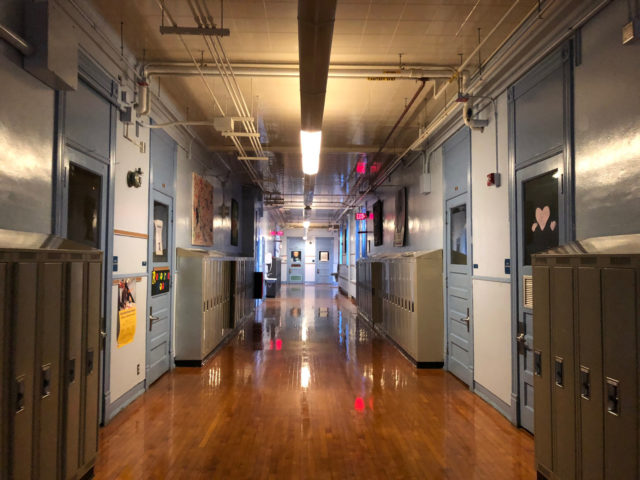 This week on Urban Spelunking, we visit a Milwaukee high school named after a local civil rights leader — Father James Groppi. But the day-to-day at the school is anything but stuck in the past.

Today you’ll find a small yet dedicated staff at James E. Groppi High School, 1312 N. 27th St., focused on giving students who may have had previous struggles with traditional education the chance to succeed.

Recognizing many students in the population have responsibilities outside of school, like supporting their families or children of their own, the school day is shorter and classes are broken into smaller sections. Students also juggle fewer classes at once, allowing them to balance outside responsibilities with their educational expectations, according to Principal Phillip Rhymes, who spoke with OnMilwaukee’s Bobby Tanzilo.

“Whether they’re on the South Side or the East Side, kids are kids and they’re living at a time that is really challenging. We can only imagine what they encounter on a daily basis and you can’t tell them you have to learn this way. You’ve got to flip the script when it comes to how we present education opportunities for kids,” Rhymes said, quoted in Tanzilo’s story.

A bit of history

The building was erected in 1893, during a time in Milwaukee school architecture — particularly the ornamental exterior — was a priority. You can see architect Walter Holbrook’s handiwork in his original plans, including an arched stone entryway, intricate window details and a steeple.

For decades the school was a magnet in the neighborhood, at one time serving an average of 40+ students per classroom. But as enrollment began to decline in the 1970s and 80s, staffing went the same route.

Now, after changing hands and education models, including a nearly 20-year run as a Waldorf School, the school is back in MPS’ control.

Listen to this week’s podcast below, especially if old architectural plans pique your interest. Bobby shares just how he tracks down all those cool original drawings in his stories.