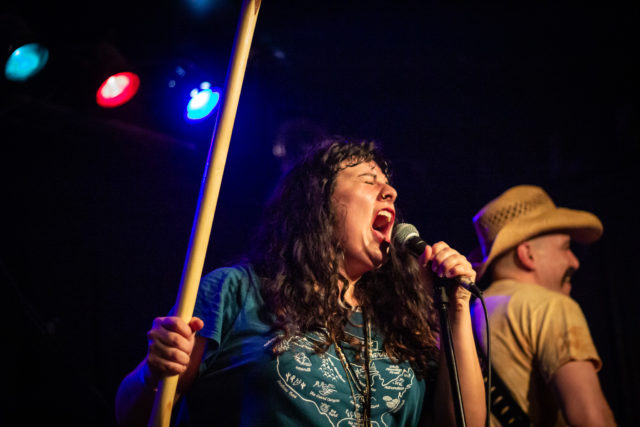 All Messed Up has been a staple experimental community event based in the Riverwest neighborhood for local musicians to meet their fellow neighbors on the intimate basis of making music together for now 10 years. Every year in December, 64 different musicians meet at Linneman’s Riverwest Inn and put their name on a piece of paper with the instruments they play and throw that paper to chance. From there, your name is drawn from a hat and you are placed in one of 16 bands and regardless of what instruments you play, you must create a set about 20 minutes long (including a cover) to perform two to three months later. Each year there is a challenge thrown into play from performing in different time signatures to adding a visual component, with this year being to do a cover related to Wisconsin.

We can’t mention this event without also mentioning that it’s famous for its band names. Super Jump Kick, Bananaconda and Sweat Pants Power Stance are only some of the band names off of this year’s cohort. If you don’t name your band by a certain deadline, your band will be named for you. Some of the past named groups as a result include Rage Piss, Butt Force, I’m in a Band With a F*cking Cop and the Surfing Assholes.

As a newbie to Milwaukee, I thought this experimental event was the perfect way to to get to know the people and part of the musical community here in the city. I was lucky enough to be drawn in a band with not only the majority of the Matts (there were a record number of Matts this year) but also the organizer, Charlie Shields. As a result, I got to hear stories of the event’s past and got some in depth knowledge of All Messed Up’s history.

This is Shields’ fifth year organizing and sixth year participating in All Messed Up, having been drawn in bands with genres ranging from bluegrass to straight-up punk. Shields runs through the history of this event starting with its originator Tony Schwader of the band Holy Shit! His group was touring in Chattanooga, Tenn., and came across a unique one-day festival. “A bunch of people were randomly placed into bands in the morning and had to play a show that night.” Schwader loved this and wanted to bring it back to Milwaukee but give people more time to make something good. So the first All Messed Up kicked off in a house venue called The Vault and every year after was held at Linneman’s.

At its fifth year Schwader was ready to end the event but Shields had so much fun participating, he had a different ideas and ended up reaching out to Schwader to let him know “I will do whatever it takes to make sure this happens again.” And his passion in “Seeing all the different possibilities…well I want to do all of it.” And from then on, All Messed Up has continued into its 10th year.

This event has had some incredible stories and creations having “grown from being a bunch of punk bands into people getting really creative.” Some bands have even continued on like The Night Howls and Sex Forecast. Shields also mentions some amazing moments where obstacles were overcome. One year everyone dropped out of the group except for one guy in the group Yuppie Drug Rugs and the guy just went up and overcame by singing songs about spiders and “he did a total sex jam that just consisted of ooh yeah girl and that was like the whole thing, those three words arranged differently.”

From my personal experience you can tell it’s a room full of support on the day of your showcase as you’re all in it together. You are making friends, getting to know your neighbor (a personal favorite per my love for Mr. Rogers), and It also feels like a great opportunity to network to find who you might want to be in your next band until next year.

As its the 10th year, Shields is now ready to pass on the torch, handing the reins over to Jessica Kroha-Anderson. He mentions “She’s a true believer” and All Messed Up lives on.