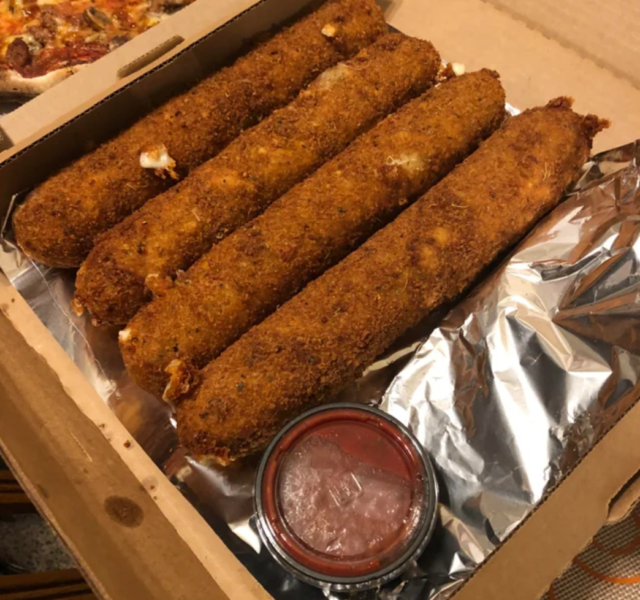 Tim Szuta is the owner of Alphonso’s, a pizzeria that makes mozzarella sticks the size of your forearm.

“Well, typical Wisconsin fashion, I was kind of hanging around having a couple of beers, experimenting on some stuff with cheese, of course and one thing led to another and world famous mozzarella sticks,” says Tim.

He says people wonder about how he can afford to make a stick that size and that the answer is that he can’t.

“But at the same time, I just feel like I’m just a small town kid and I always feel good when I give back to the people,” says Tim.

“Everyone’s thinking El Presidente Dave from Barstool Sports is going to make a trip over here because within like, eight hours we had 1,001,000 views.”

The views brought in more mozzarella stick orders from teens and college students, but in the midst of it all some long time fans of Alphonso’s have had a harder time getting the food they love and new customers can get turned off and not come back. On top of that, Tim’s fryer decided to kick it.

“It’s tough because all this exposure is really kind of a blessing and a curse at the same time,” says Tim. “It’s so difficult for me to keep up with this.”

Tim is also between physical spaces for both his home and commercial property. He had to prioritize buying a new spot for Alphonso’s before buying a house for himself. Keep in mind that the space he bought on 92nd and Greenfield Avenue is for a much needed expansion. Right now the pizzeria is practically a hole in the wall, a roughly 700 square foot restaurant that cooks up not just pizza but Jamaican food with their sister restaurant Kings and Queen’s Jamaican Kitchen.

“I felt that you never know how things can go,” says Tim. “So I really wanted to secure my position in the city.”

While the orders might be backed up, Tim says people should consider the pizza, too. It comes from a recipe from one of Tim’s mentors growing up, who the business is named after. Without him he wouldn’t have the business period.

The pizza is in Phaidon’s “Where to Eat Pizza?” Almanac, which Tim says people can be surprised to have a hidden gem in their town.

So if you’re in the mood and prepared for a wait, know what goes behind the scenes and what it takes to serve a viral food crave and be a restaurateur.