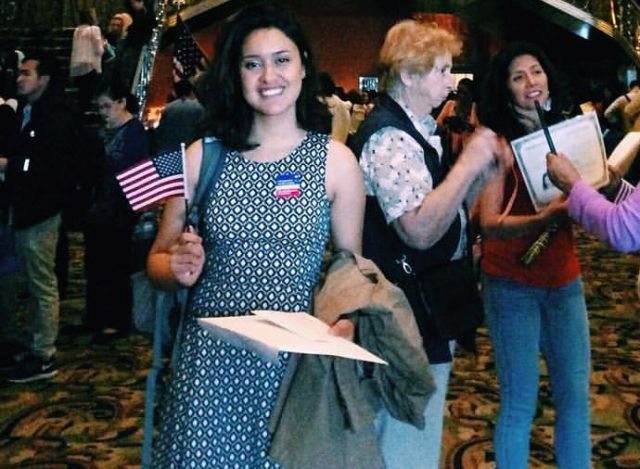 Among the more than 125 million expected voters in next week’s presidential election will be four Milwaukeeans who are among America’s newest citizens, recently naturalized and prepared to vote for the first time. 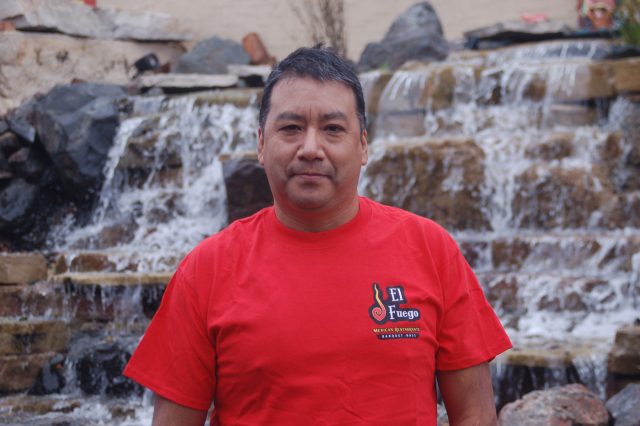 It’s a decades long goal come to fruition, said Jose Martinez, 48, executive chef at El Beso and El Fuego restaurants, of the chance to cast a ballot in the upcoming presidential election.

“It’s always been a dream of mine to vote,” said Martinez, who just a few months ago, became a naturalized U.S. citizen.

It was a lengthy road to citizenship for Martinez, who arrived to Milwaukee from the Western coastal state of Michoacán in Mexico. Like many immigrants, he came to America as a teenager, earning amnesty after then President Ronald Reagan signed into legislation the historic Immigration Reform and Control Act of 1986. He’s worked for the same restaurant owners since 1981, first as a cook and then manager at two different Omega restaurants, before being brought over as head chef for El Fuego and then El Beso when they opened several years ago.

Martinez said his busy work schedule and unwarranted fears about abandoning his birth country kept him from becoming a citizen sooner. He’d always been interested in politics, he said, and attended each Voces De La Frontera organized May Day march for immigration reform, since 2005. It was during those marches where he’d be approached by individuals who were registering voters, and the reality of immigration status would set in. As a green card holder, Ramírez had the right to work legally and live permanently in the U.S. with the protection of laws afforded to all citizens, but those rights did have limits.

“When they’d ask me if I was registered and would be voting, I’d put my head down and say no, I can’t,” Martinez said. Determined this election cycle to say “YES, I can,” he signed up for citizenship classes at Journey House, 2110 W. Scott St. Three months later, Martinez was sworn in as an American citizen and preparing himself to exercise a right some take for granted, while others cherish — voting.

“I’m actually not feeling pressured or nervous about it because I’m so excited. I’m proud that I finally can,” he said.

“It’s always been a dream of mine to vote.”

Joining Martinez at the polls Nov. 8, will be Aurea Ramírez Varela, 34, and her husband Esteban Aguilar León, 34, both of whom emigrated to the U.S. from Costa Rica. Ramírez also became naturalized earlier this year after also taking classes at Journey House, while her husband, who has been a legal resident since his teens, completed the process last year. Ramírez, who serves on the Board of Directors for Centro Hispano Milwaukee and is the president of the PTA at Alba School, said not being able to vote in previous elections left her feeling a little hollow.

“I’ve always been political, even been involved in voter registration drives, and I always understood the power of the vote, though I couldn’t. That’s why I feel that all those who can vote, have an obligation to,” said Ramírez, who’s dinnertime chats often include the latest news in what has been described as the most polarized election ever.

Though she said she’s still undecided, and currently researching this year’s third party candidates, she’s not fond of the negative spin that some of the pre-election talk has bestowed upon immigrants.

“We came here to work hard and live the American Dream like everyone else,” said Ramírez, who was an accountant at a tourist hotel in Costa Rica before moving to America with her husband. For her and her husband, the fact that many immigrants don’t have the right to vote makes theirs that much more important.

“In a way we are providing a voice for the millions who can’t vote, who are still forced to live in the shadows and can’t partake in the process,” she said.

“In a way, we are providing a voice for the millions who can’t vote, who are still forced to live in the shadows and can’t partake in the process.”

It’s a story Victoria Dubrovina, who was born in Russia and teaches English as a second language and the citizenship class at Journey House, hears often. As an introduction to her citizenship class, Dubrovina has her students watch a documentary about people gaining citizenship all over the United States and giving their reasons for doing so. In the movie, she said, many of them said they were tired of living in hiding and yearned for the same rights everyone else had. 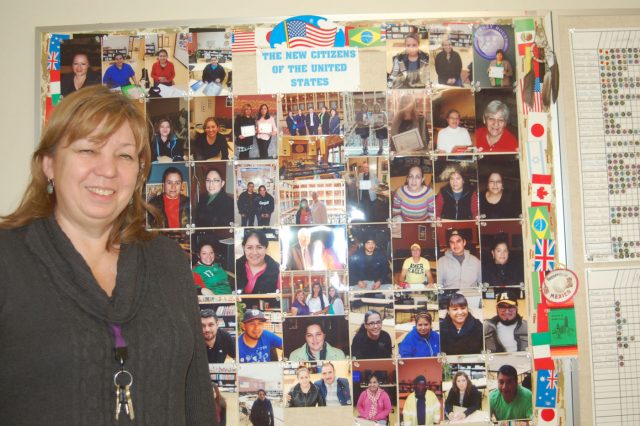 Victoria Dubrovina stands next to a collage of her students who are now US citizens.

“Including the right to help choose the next president,” Dubrovina said. To prepare them to exercise that right, the Mayor’s office provides a voting workshop, including bringing in ballot machines, to walk America’s next citizens through the act of voting.

“When the workshop begins, the students are a little confused and intimidated by the process,” she said, but afterwards, “you should see how proud they are.” Journey House’s citizenship class, which is funded through a private donation from Bea Benidt Wester, wife of the late philanthropist Charles E. Benidt, has a 100 percent success rate and has helped more than 125 immigrants become citizens by helping them prepare for the questions administered during the citizenship process and covering the $685 cost of the application. 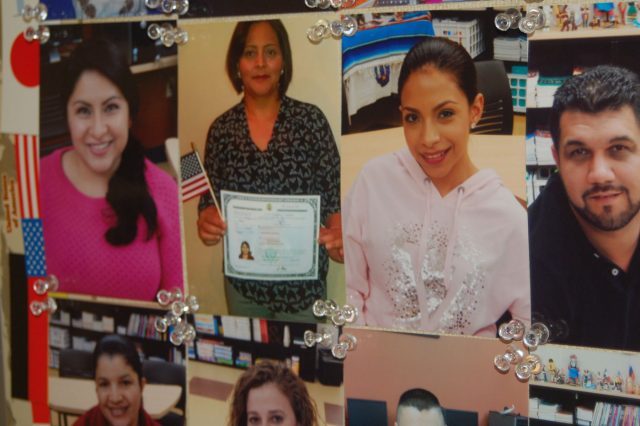 Dubrovina, who described Martinez as one of her many prize pupils, said the class has a long wait list and can only serve 25 pupils a year due to funding limitations. The test she prepares students to take entails questions about history and the governmental structure of the United States. Surprisingly, given his status as executive chef of two extremely successful Mexican restaurants, Martinez was nervous about not succeeding in class, Dubrovina said.

“But, he did great. It goes to show you how important it is for them to become citizens and earn the right to express their opinions through their vote,” she added. 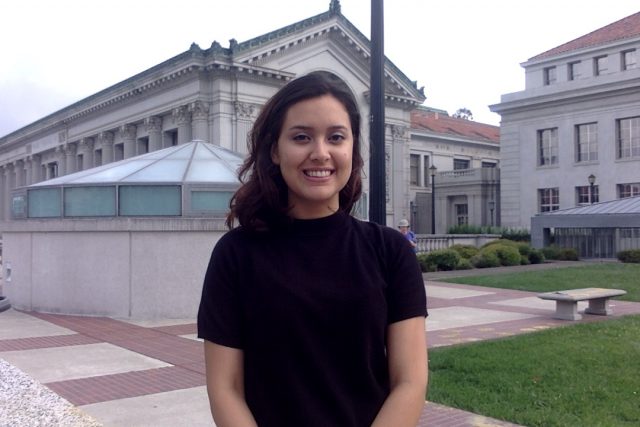 Across the country, former Riverside High School student and current UC-Berkeley political science major, Maria Siliezar, 22, almost missed her chance. Siliezar took her citizenship test last month. The last question she was asked, she said, was “where is the Statue of Liberty?”

“It’s on Liberty Island,” she answered, before coming to the realization that she’d no longer have to carry her green card and other documents as proof that she wasn’t undocumented. Siliezar, who moved to the United States from El Salvador with her parents 10 years ago, initially struggled with English language and the cultural change but by high school, was taking AP history and other advanced classes. Her mother, who works long hours as a caretaker, has continually pushed her to gain an education, to challenge herself and to make a difference, said Siliezar. Aside from school and extra-curricular activities, she volunteers as an interpreter for lawyers working on asylum cases for indigents and LGBT individuals.

“I’m able to speak up for those friends who are unable to."

She describes this election as an especially important time for Latinos, including those who recently became citizens, to become involved in the political process. Latinos are being portrayed in a negative light in our society, she said.

“It’s kind of scary how that rhetoric is resonating with people,” she added. Like Ramírez, she views her first vote as carrying an added importance.

“I’m able to speak up for those friends who are unable to,” Siliezar said.

That’s why last month at the end of the citizenship ceremony, after waving a small American flag and posing for pictures, she registered to vote.

“Even though I always had an opinion the fact was I couldn’t vote because I wasn’t a citizen. But, now I actually have the space to participate and make my opinion heard by voting,” she said.