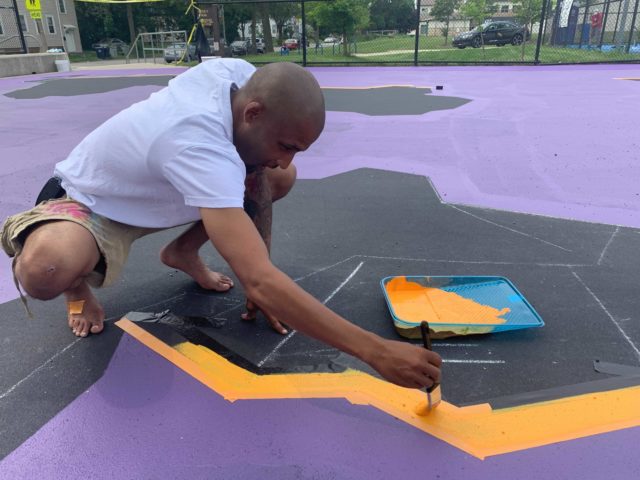 Near 22nd and Burleigh, there’s a park called Moody Park. It’s plopped right in the middle of the Amani neighborhood. And that park, in particular, is a real magnet. There’s a new splash pad, a playground and picnic areas, plus the COA Youth and Family Centers programs lots of activities there.

But two years ago, a shooting shook Moody Park and its neighbors. Artist Jamahl Turner takes us back to 2018.

“Two summers ago Quanita ‘Tay’ Jackson was unfortunately, innocently shot by a stray bullet, by two cars coming down Burleigh. She just got done putting together a basketball tournament. It was a three-on-three tournament, and it was the second day of it in which this unfortunate event happened.”

Jamahl says Tay was a freedom fighter, an activist who organized and spoke out against the very violence she fell victim to.

And now two years later, Jamahl is working to honor Tay in the same park where she lost her life, by helping the community gather there once again, in peace. He and his art collective, Art Fu Young, are rehabbing three basketball courts in the park, transforming them into a colorful and active mural.

“This is home. It’s basically getting rid of that tainted image [the youth] have of Moody Park being a war zone. And get it back to a safe haven that it once was,” Jamahl says, as he paints a purple border around a black accent on the court. “So right now, it’s just basically filling in the colors. Like it was one of those [paint by] numbers sheets. Purple is ‘one.’ Blue is ‘two.’ We’re at the final stages.”

Chad Wleczyk is the co-founder of Activate Co, the organization that helped with visioning and project management. Chad is a man of faith and says he sees something more divine here, a basketball prophecy of sorts.

“We went to get paint and the receipt was 1-1-1-1 which is the address of Fiserv Forum. No change,” he says, leaning in and whispering slightly. “This project is to see community come together to see people’s passions, talents, gifts awaken, ignite.”

A divine day, indeed, but still bittersweet. I asked Jamahl how he feels having done this for Tay. He points to the baseline of one of the courts, which has been dotted with children’s hand prints in paint.

“We got to have the kids’ hands there, letting them know that, ‘We’re here with you, Tay.’ You know, so I think right now she will be looking down on us saying like, this is everything we needed. This is everything,” he says.

Jamahl says he and Chad will be there to keep the paint job up, moving forward, checking back often to make sure that it’s vibrant for years to come.