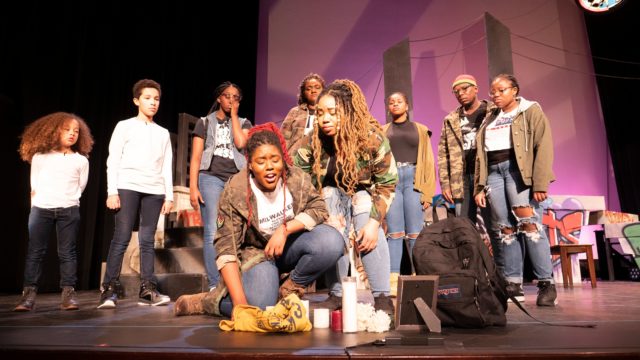 Black Arts MKE is a non-profit organization that collaborates with artists and art organizations here in Milwaukee. Executive Director Barbara Wanzo said the main goal of the organization is to spread representation by providing a space for African American artists to be creative.

“The original idea is to help local African American artists and art organizations to succeed,” said Wanzo. “To give them a platform, give voice, give them visibility so that they can be discovered by theater and music around town.”

Black Arts MKE is celebrating its fifth year as an organization as well as producing the holiday musical “Black Nativity,” a song play written by Langston Hughes. “Black Nativity” is a story about the nativity, otherwise known as the birth of Jesus Christ, told through gospel, poetry and dance.

Wanzo said they wanted “Black Nativity 2.0,” as she calls it, to work with the present times and to make it relevant to a younger audience.

“I am someone who was born and raised in Milwaukee and is very familiar with my community,” said Wanzo. “I began to look for a director of a younger generation who had something to say.”

In previous productions, the musical included references that touched base with social justice topics such as the #MeToo movement, Black Girl Magic and referenced Colin Kaepernick.

This year is no different. Director Antoine Reynolds uses the show to represent the staggering rate of African American youth deaths by violence. Wanzo says the production is meant to bring out all your emotions.

Black Nativity had many elements that made it easy to love, from the rich vocals to the detailed traditional fabrics and even the relatable characters. Having the musical set in present-day Milwaukee added another touch to its magic. “Black Nativity” is an example that important traditional stories can be modernized without jeopardizing its charm.