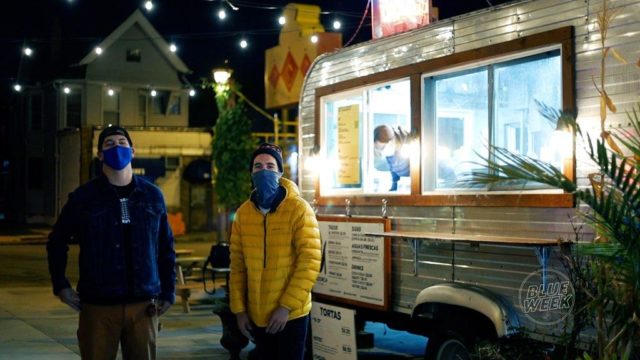 Does that sentiment ring familiar? I know I have felt that type of loneliness. But mental health can be difficult to talk about when you’re focused on what bills you have to pay. Even with a pandemic that experts say has taken a toll on the physical and mental health of just about everyone, it can be hard to identify that we’re feeling sad or that something’s off.

“There’s a line in the song ‘Winter in Wisconsin,’ which was the first single from the album,” says Joe. “It says, ‘If you are what you wear, I’ve got a lot of blue genes.’ I’ve always been a big fan of the dad joke. But when you think about it the human condition is to, I think, be kind of on the negative side. We’re all dealing with things both internally and with the things that are happening in society that are taking a toll on us every day. It’s not necessarily about defeating those genes that have been bred into us but it’s more so learning about them and learning how to manage and almost use as an advantage in certain circumstances.”

Joe started writing songs for “Blue Genes” before and during the pandemic. Yet the music he wrote isn’t strictly about the pandemic itself despite it fitting with the times.

“I see a lot of other people being catalysts for openness with mental struggles,” says Joe. “That’s one of the things that we all need to be honest with, open up about and work together on because the sum is greater than the parts.”

As part of his effort to raise awareness of mental health, Joe has launched an initiative called Blue Week alongside his new album. This week people can go to certain restaurants and shops and support them as they offer special foods and items. Proceeds from sales go to Milwaukee’s National Awareness of Mental Illness chapter.

“One of the things that I wanted from the week is to have diversity in the different things that the week provided,” says Joe. “Obviously, I’m a big foodie. So food was like the first thing.”

But Joe has also reached out to different places like Canni Hemp Co. and FOURTHECITY. He wanted to include shops during Blue Week as the pandemic has been hard on not just people, but the businesses they run.

“It’s just funny how everybody’s so different but the motive behind it is always the same,” says Joe. “These companies just want what’s best for Milwaukee. I don’t know if that was just a birds of a feather type thing; I just so happen to reach out to those people or is Milwaukee really made up of all these awesome people? I think that the second one is true.”

Blue Week is happening now so you have all week to eat food and pick up special merch. Joe says Blue Week is a way for people to get out of the house now that winter is ending and the weather is changing. People can put their money toward a worthy cause and also support local businesses.