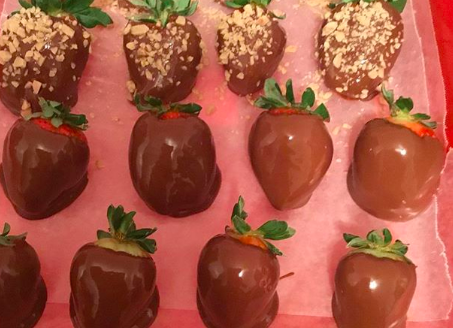 Caitlin Alexandria Russell always had an itch for baking. Unlike most kids, she spent her early years in the kitchen, covered in flour, turning the imaginary into substantial, edible desserts.

Russell is the owner of Bougie Berries, 7157 W. Burleigh St., a Milwaukee dessert boutique. Although her earliest memories were spent in the kitchen, Russell didn’t consider baking a viable business venture until she enrolled at Alverno college.

“It wasn’t due to passion,” said Russell. “It was something I was good at and I was able to make money to pay for books. It was a resource and it spiraled out of control from there.”

It started with a few dessert items at college events, then she became the go-to person for creating tasty treats. Russell’s first job was catering a wedding which led to a loyal clientele. It was around that time she realized she could make a living off of her passion and switched to a business major.

“Food is love and desserts are love times 10,” said Russell.

Russell said that baking also eases her social anxieties. “This is calming for me,” she said. “A lot of people don’t know that I have really bad anxiety. Baking gives me a place to release that and feel comfortable.”

Bougie Berries is a prime example of how a self-made business invests back in the community. It’s shown in Russell’s decision to locate her business right across from she grew up, to partner with organizations like Teens Grow Greens and Milwaukee Urban League, where she mentors kids and to collaborate with local businesses for a weekly soulful Sunday pop up shop.

“It’s the bridge that I have between the community and the people that I may not know,” said Russell. “If you had my cupcake, you know me.”

For more information on Bougie Berries and how to place an order, check out it’s Instagram page and Facebook page.