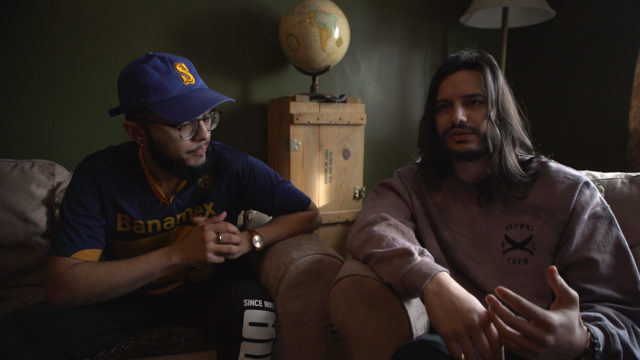 “Right now Miltown – especially the South Side – is on the cusp of something real special,” said Sebastián Daniel (Sebas), a local musician and one of the two members making up a local Latin hip-hop duo by the name of Browns Crew.

Along with the other half of the Crew – Chris Piszczek (Chris P.) – the two South Side-born artists are rapping about a narrative often hidden in the background: growing up in the Latino hood on Milwaukee’s South Side.

“It’s like a South Side renaissance,” said Sebas as he described the up-and-coming creative scene happening on the South Side of Milwaukee. “We talked about it like who is putting on for the South Side…” said Chris P. “That’s a stage that’s just waiting for us to take it.”

Sebas and Chris P go back to grade school and have collectively been making art together since they were young boys. Between music, poetry and performance arts, the two have always felt artistically inclined.

They also feel a strong sense of responsibility towards their community and their culture. Back in 2011, the duo took a volunteer trip to serve communities in need in Oaxaca, Mexico. Sebas challenged them to start taking music seriously. It was on this the trip to Oaxaca when the Browns Crew was born.

The group fuses Latin American sounds with hip-hop drums and cadences to deliver stories of immigration, struggle and life as Latinos from the South Side of Milwaukee.

“This is what goes on in our everyday lives. It is people living here who don’t have papers,” said Chris P. referring to the South Side’s Latino immigrant population. “They face deportation on top of the violence and all that.”

Their sound is stylized for the Latino community as they rap to Cumbia-inspired horns and accordion tracks that are very much “for the culture.” Their music is inspired by other Mexican folkloric genres such as Bolero and Norteño.

Browns Crew performed a set of new material at Cactus Club in February and they plan to release those tracks to the public in the spring. They’re currently collaborating with a Cumbia group from Buenos Aires, Argentina by the name of Los Imparciales. Upcoming show details can be found on the Browns Crew Instagram page.

Watch the video above to learn more about the music and message behind Milwaukee duo Browns Crew.