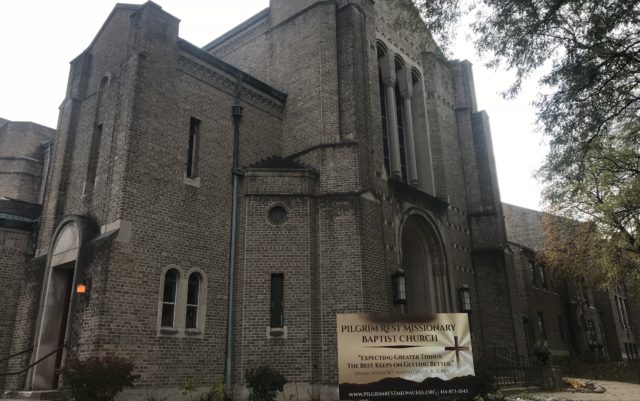 Last week, Pilgrim Rest Baptist Church hosted dozens of Sherman Park residents for a Building Bridges listening circle. Milwaukee non-profit the Zeidler Center for Public Discussion has hosted these conversations for three years now, and are now expanding the discussions to Madison. Community members are invited to meet their local law enforcement officers to share any hopes or concerns for improving their neighborhood and the relationship between officers and residents.

Listen to the audio story below to hear from Alderman Khalif Rainey and Sherman Park resident Shellie Scott about this initiative.

“Sherman Park is on that teetering point,” said Alderman Khalif Rainey. He, of course, wants to see the neighborhood continue to move in a positive direction. A project such as the Sherman Phoenix, which opens its doors November 30, gives the community hopes for attracting neighboring Milwaukeeans and more economic growth.

Having a listening circle, on the other hand, is more about fostering constructive dialogue between the police and the people.

I was invited to sit around a circular table but was asked not to record the listening session so people would feel comfortable opening up. I sat between to two older residents who sat next to a current police officer and a recruit who hopes to graduate from the police academy in January. They sat next to facilitators who guided the conversation.

The topic of the evening was authority. Each person in the group was given time to discuss experiences with authority and ideas about what positive authority looks like. Community members opened up to officers who listened quietly and patiently.

“I didn’t see that Robo Cop thing,” said Scott, a longtime resident of Sherman Park. She added the officers seemed less “intimidating.” This conversation allowed Scott to walk away with a much more positive, humanized connection with her local law enforcement.

Alderman Russell Stamper announced a listening circle would be coming to Metcalfe Park on October 30 at the Wisconsin Black Historical Society. The next session in Sherman Park will be November 29. Sessions are also held in Amani, Clarke Square and the Harambe neighborhood. Find the full schedule of sessions on the Zeidler Center website.