Why you should care about Milwaukee’s Open Data policy

Why you should care about Milwaukee’s Open Data policy 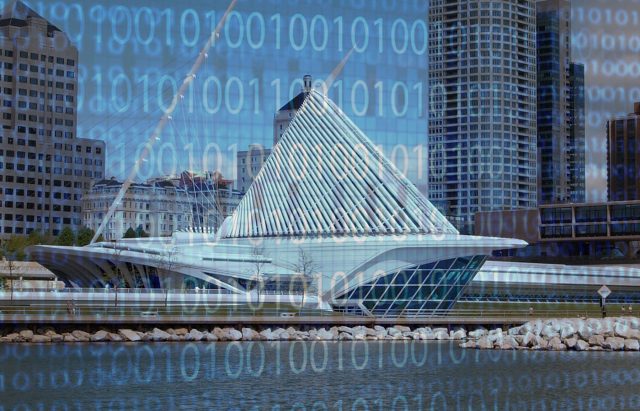 Over a month ago, the city of Milwaukee established an Open Data policy. This is huge news for the city, but what does it mean for you? Cities like New York, Philadelphia and Chicago have not only established policies but have built apps and websites around Open Data. But what exactly is Open Data?

According to Milwaukee’s policy, Open Data is described as:

“Open data” means data that is available online, in an open format, with no legal encumbrances on use or reuse, and is available for all to access and download in full without fees [or a requirement of registration]. “Legal encumbrance” includes federal copyright and privacy protections and other, non-statutory legal limitations on how or under what conditions a dataset may be used.

To put it simply, Open Data is all about government transparency, which helps to maintain a healthy relationship between government and the community. Various governments make all types of data available to the public.

For example, there is data of all the parking tickets that were given in 2012.   Someone actually took that data and create a map of the hotspots high-ticketed areas in the city. There is even data where you can find a list of all parking spaces and their code signs. 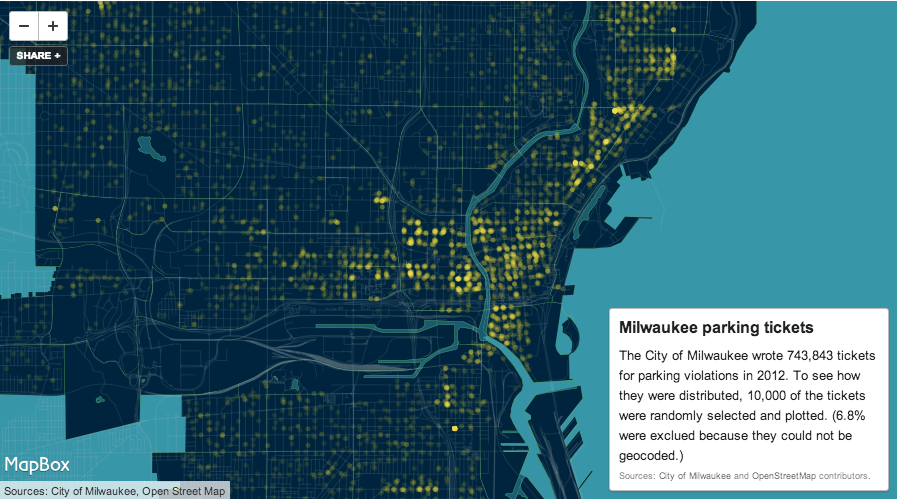 A map of parking ticket hotspots in Milwaukee

Cities like Chicago, Philadelphia and New York has open their data to developers to create useful tools and apps for their citizens.

In Chicago, there is a site called “How’s Business.” The website provides a dashboard of Chicago’s local economy. It uses open data from the City of Chicago, the Bureau of Labor Statistics and the Woodstock Institute

In Atlanta, there is an app called Cycle Atlanta that uses Open Data. Cycle Atlanta uses your phone’s GPS record your routes in real-time, allowing the City of Atlanta to know which routes cyclists prefer. The app will also allow users to report problems along their route such as potholes, obstructed bike lanes, etc. The information collected by the app will be used by the City of Atlanta to make strategic improvements to bicycle infrastructure.

In Boston, they created an app called “The Street Bump.”  Using your phone, the app can collect collecting data about the smoothness of your ride (and differentiating between a pothole and a train track). This information helps the city of Boston get details about urgent problems and informs the city’s long-term investment plans (this sounds perfect for city like Milwaukee).

There is even a company called Councilmatic that will build a system using Open Data to keep you engage with your local city politician and make it easy to follow local legislation.

I talked to Milwaukee Data Initiative’s Matt Richardson on what Open Data could mean for Milwaukee and its citizens. Richardson helped get the policy passed in Milwaukee.

TM: What does your organization, Milwaukee Data Initiative do?

Matt: We’re a community-based group that works with local technologists and data professionals that are interested in doing good in their city and using technology or digital information to do that. We organize regular meet-ups that connect people together and allows people to share ideas. We also host weekly events that allow people to get access to professionals so that they can work on projects of interest around data, open data or technology.

TM: Can you give me examples of what kind of data is available in Milwaukee?

Matt: At the City of Milwaukee, they publish a lot of information around property information, property values and sales information. All of that information is published open and freely and for free use on a regular basis. And then in a place like the County, open data from that perspective is the real time transit-information that’s used to power apps like the Transit App or the MCTS Ride App.

Tarik: So, for example, say…why would a “Jack Smith” in Riverwest care about this open data policy?

Open data would publish the [budget] information out into the community. Then [the city] would engage with people who can help make sense of the data and then turn it into something like a usable digital interface like an app or a website or even a map or some sort of visual — that could really help to simplify that [budgeting] process. It can be the first step in creating a deeper and better conversation between residents and government.

Tarik: What are the next steps for execution of the open data policy, where the average person can actually utilize the data for their benefit?

Matt: Well, one of the great things about that has been happening is for the last 15 or 20 years the city has been publishing some information. But, the next steps after an open data policy is initiated at a city: typically, our timeline is provided for how things are going to start to roll out and then resources are allocated.

That means, people and money within the city are allocated to work with department heads and work with the mayor’s office and other elected officials to be able to publish information for people to use. And then the third and final step is really the city reaching out and engaging with community partners.

And typically that means either the local Code for America Brigade, which I am a part of; or other organizations that are the ones that are involved with the National Neighborhood Indicators Project. Those groups help government after they’ve published the information. It creates some capacity for community organizations and residents for how to work with that information.

The National Neighborhood Indicators Partnership (NNIP) is a collaborative effort by the Urban Institute and local partners to further the development and use of neighborhood information systems in local policymaking and community building.

TM: What kind of data would you pick out and build an app or website to inform or engage with citizens?

Matt: That’s an interesting question. Really, I think the best way for me to answer that is to answer based on what other people have asked for me. You know, a lot of people are really interested in health information and information about teenagers and young people in the city. How many of them there are at any given time to be able to understand where are we allocating our resources.

And I think that that’s really valid, especially right now in Milwaukee. As you know, we really could be utilizing more resources to help develop young people throughout the entire city. Also, police information and information about

Fortunately, the police department has already signed on to a commitment from the White House to open data. So, they’re already on board with that which is really exciting and will hopefully increase some of the dialogue that happens. They can help sort of create context and opportunities to engage around that information.

Personally, I’m really interested in health-based information and economic development information because that applies a lot to my own professional work. But, I think there’s a lot of opportunity working with the Department of City Development and the Health and Human Services team over at the city to really leverage some of that valuable information in a way that both creates an effective conversation but also protects the privacy of people which is also something that’s really important to us and to the city.

Tarik: Speaking of privacy and health, like what kind of data would be available in regards to youth and health?

Matt:  So, generally speaking, open data policies (and the one from the city specifically) doesn’t allow the city to publish anything that would identify a person directly. So, usually what that means is that they’re publishing information — maybe on a regular basis, daily or hourly — that’s aggregated. So, we might get information about how many teens there are in the city overall.

live here.” That would really be violating their specific privacy.

Tarik: So, for health reasons, do they report as far as smokers? Obesity? That kind of stuff as well? Or is it just more demographic information?

Matt: It’s interesting asking that question because the city is only capturing information primarily, that’s really relevant to its own department. So, last year, one of the city department staff actually organized a “hack-a-thon” around teenage reproductive health. It was really interesting.

But again, that’s an aggregate. They’re never going to publish information that’s going to be identifiable. Part of this process of opening data is about building greater trust between government and its residents. And the worst thing you can do in that situation is publishing people’s identifiable data.

Tarik: And let’s go talk about the economic impact. What kind of data can you get to develop tools and apps and websites for economic impact or development?

Matt:  So, that has two possibilities or two opportunities. One of them is once information is published about the current economic practices and strategy (that’s being put into place and what the impact is over the last year or two) we might be able to get a better sense of how we could adjust those programs or what else we could be doing to benefit people. Specifically, another area of interest of mine is what programs are affecting and helping people and families in poverty. How is the economic development policy really helping individuals that really could use opportunities for increasing their household income?

There is an opportunity to do a retrospective look at what are we doing and maybe get some additional information that would help us make more informed decisions as we go forward. The other really interesting side effect of opening data is that if a citizen sees a problem or an opportunity and they have data that can help them answer that question (and if having that data and turning it into something valuable in the marketplace). Now people have a tech start-up that really gives them an opportunity to take open data and legally use it to start a business that can grow into something that also provides them income and potential jobs in the city.

TM:  Are there any potential cost savings to the city?

Matt: Yeah, I think over time a city can realize cost savings. It’s partly because when you know what you’re doing and when each department has access to valid information or information that’s relevant to the work that it’s doing — it’s much easier to break down those silos between departments and have them be more efficient working together.

There is no real definitive study that has been done that says that you put in an open data policy and you’re going to save 5 percent on your operating budget. But, overall, when you have access to information and when you have information systems or data systems that are within a city that comply with an open data policy’s technical requirements — it now becomes so much easier for those systems to talk to each other and therefore it becomes easier for departments to share information and increase their communication with each other.