Changing the conversation around disability

Changing the conversation around disability 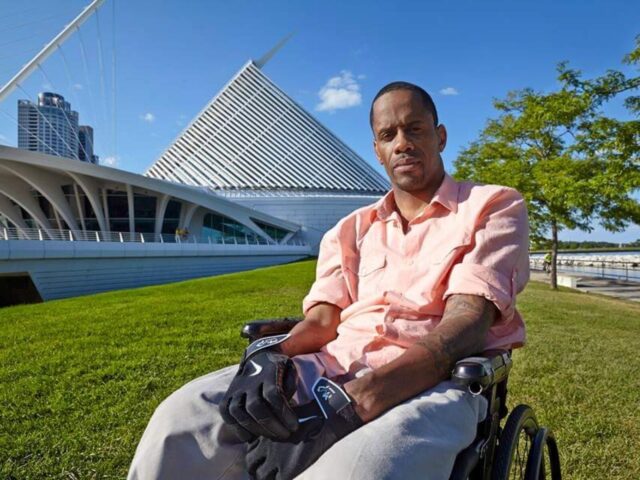 Going to the movies is often a challenge for individuals with hearing loss. Brian Peters, who is deaf, has to call in advance to make sure his local theater offers caption readers before he sees a movie. Sometimes the devices are out of batteries or not functioning. If there is a problem with the captioning, Peters doesn’t find out until the movie has already started.

“I have to get up and miss the beginning of the movie to go find an attendant to come and work out the problem for me,” said Peters. “My movie experience is very different than someone that can hear.”

Often when talking about disabilities, we picture ones that are physical and might not consider “invisible” disabilities such as hearing loss, cognitive impairment or autism.

Peters is the community access and policy specialist for IndependenceFirst, a Milwaukee program center for people with disabilities. The organization advocates for disability rights in Milwaukee, and over 50 percent of its staff identifies as having a disability.

“Our society tends to put people in different boxes, so even when we are talking about disabilities, people might automatically think that it’s only someone in a wheelchair,” said Gerald Hay, IndependenceFirst’s program manager.

“Even with all the laws passed and you can look at it in the same way as inequalities with LGBTQ and Black Lives Matter movement, society doesn’t seem to care,” said Ross.

IndpendenceFirst promotes the idea that accessibility benefits everyone regardless if you have a disability.

Beyond creating a community that is inclusive, IndependenceFirst strives for self-empowerment and self-advocacy. Ross became paraplegic due to gun violence and he admitted that at first, he lost his will to live after he lost mobility. It was through interacting with other individuals who are disabled he realized a meaningful life looks different for everyone.

Although many individuals still face discrimination, Peters advises that the first step for independence is to know your rights.

“When I was younger I used to work at a fast-food restaurant and I thought that I had the ability to become a manager,” said Peters. “I did all the paperwork and all the classwork that was required to become a manager, and it just seemed to me like I hit the glass ceiling.”

His experience was right around the time the ADA was signed and although Peters had the intention to move up in his career he was never given the opportunity.

“My advice to people who do experience discrimination is to find out what your rights are,” said Peters. “What is the stuff you need to take to make sure you can’t be discriminated against. Educate yourself because it’s really important to know what you can do.”

“What I want people to realize is when you see me don’t look at my disability first,” said Ross. “Look at me as a person.”

Watch the full in-depth conversation below to learn more about disability rights, self-empowerment and how disability plays a role in one’s perception of masculinity.

Listen to the audio community story below.