Check out photos from the first ever Urban Spelunking bus tour

Check out photos from the first ever Urban Spelunking bus tour 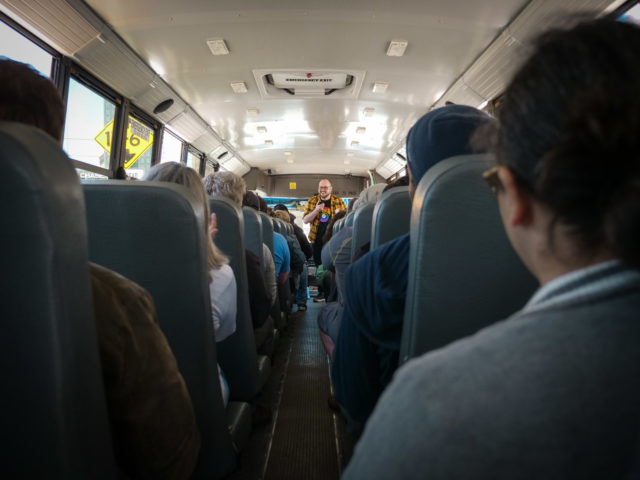 We had a blast at our first ever “Urban Spelunking: The Bus Tour” event!

Last Saturday, a group of 40 urban explorers joined OnMilwaukee’s Bobby Tanzilo and I for tours of two previously “spelunked” places featured on-air, plus one location new to all of us.

America’s Black Holocaust Museum is a gorgeous new development at Vel R. Phillips Ave. and North Ave. It offers an honest and emotional look the injustice African Americans have faced throughout American history, including the brutal emergence of the slave trade, the shameful rise of the KKK and photos of lynchings from the early 1900s.

It concludes with an exhibit about mass incarceration and police violence, shedding light on the disparities that still exist today. The museum is opening soon, according to director Brad Pruitt, though a date has not been formally announced.

For our second stop, we visited the former Wisconsin Avenue School, a gorgeous 1919 schoolhouse on 27th and Wisconsin Ave.

It has been vacant for several years and is currently undergoing renovation. It will eventually reopen as an extension of the Ambassador Hotel, offering extended-stay boutique suites inside of the old classrooms. During our visit, owner Rick Wiegand gave us free reign to explore all floors of the expansive building, including classrooms, the auditorium and basement gymnasium.

We closed out the tour at Wisconsin Knitwear, an unassuming building on 11th and Lincoln Ave. You wouldn’t know it from the outside, but the company is the only maker of knit hats in the state, and business is going strong.

Owner Steven Arenzon showed us around the knitting factory, which was closed for production on the day of our visit. He demonstrated the fleet of 1940s machines still in use today, and proudly showed off the hats his company has made for musicians like Wilco and Dr. Dog.

Take a look at the gallery below, and follow the links to revisit our spelunking journey.

Based on positive feedback from attendees, we hope to do a similar event in the future. We’ll keep you posted!