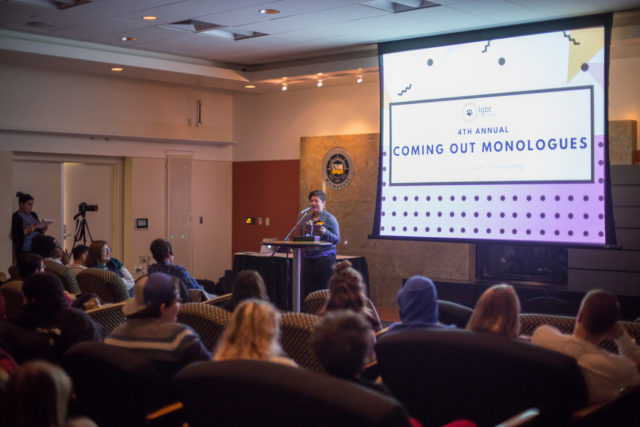 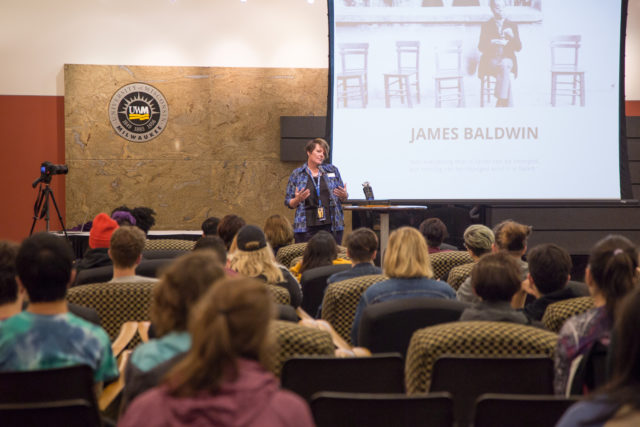 AN OPEN MIC NIGHT AND A SAFE SPACE

October is LGBTQ History Month. Members of the community spend the month embracing their identities, sharing their stories and on October 11, people celebrate National Coming Out Day. In honor of LGBTQ history month, the University of Wisconsin-Milwaukee hosted its annual Coming Out Monologues at the Fireside Lounge. (Read more below)

People creatively told their coming out stories, they talked about discovering their identities and some told their stories of transitioning. Experiences as an LGBTQ member and member of the United States military were shared, as well as stories of sexual, physical or emotional trauma.

The event is much like an open mic night. The line to get into event and participate was out the door. Because of the sensitivity of the stories, stickers on a participant meant they did not want to be photographed or identified. When stories of trauma were shared, students were warned in case certain words may trigger trauma within other students.

The event brought in over 75 students, faculty and community members. Snaps and claps during people’s performances were common as audience members wanted to show support and respect for each other’s stories.

People laughed, people cried, but most of all, people were vulnerable. It takes a lot of courage to share intimate stories with strangers. From those who identified as queer to transgender, the room was full of a variety of intense and emotional stories.

This year was the fourth year for the Coming Out Monologues. Miranda Flores Farley, who identifies as queer, shared for the first time. They shared their poem in the room with the lights off, making the poem feel more raw and powerful.

Sarah DeGeorge, a past participant, was in the crowd supporting Miranda and other participants. For Sarah, this event serves as a moment of inspiration and empowerment amongst the members of the LGBTQ community and its allies.

“There are a lot of real reasons to be afraid, but the benefits of living a true life outweighs them all,” said Sarah.

Listen to an interview with Miranda Farley Flores and Sarah DeGeorge below.