Community art brings the Muslim and Black community together

Community art brings the Muslim and Black community together 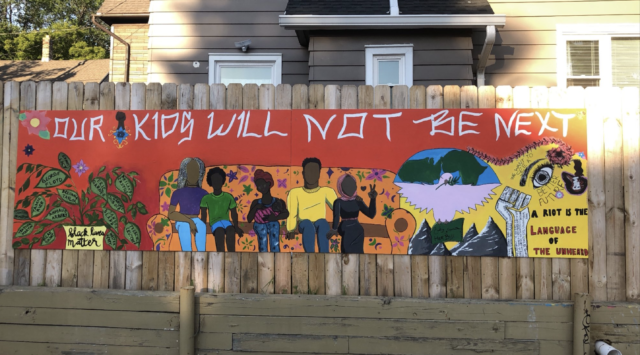 To some, it may seem like the fight for social justice has died down. But even if there hasn’t been much coverage, protesters are still out on the streets marching for their lives. Not only are there demonstrations, but Milwaukee’s public art scene continues to display its support.

Milwaukee artists and activists have spent this past month using their craft to show support and stand in solidarity. One example is the Muslims for Black Lives mural, organized by Fanana Banana, an art collective led by two Muslim women. Co-founder Amal Azzam said the recent George Floyd mural inspired the group to reach out to building owner Ihsan Atta.

“He offered to cover all supply costs and allow us to paint the fence,” said Azzam. “It was a week and a half before that Sunday. Sometimes you have to reach out and say you want to support.”

Once Fanana Banana received approval to paint a community mural, they wanted to make sure they included as many voices as possible, including Black Muslims, who are often misidentified and unrepresented. They reached out to Milwaukee Muslims via Instagram and began their planning stage.

“Everyone was really involved which was amazing,” said Azzam. “I didn’t know what to expect. That Sunday, we still had to wing it, to be honest.”

I was one of the Muslim artists who participated and helped design the middle panel titled “Our Kids Will Not Be Next” recognizing Black children who are affected by targeted police brutality looking toward a brighter future where they are not received as a threat.

During the July 14 community event, Fanana left two side panels empty for the public to join in and design on the spot. The final outcome had hopeful messages and honored Malcolm X, James Baldwin and Black women.

“It just shows that if you give people the opportunity to work together for something and give them supplies and support it can happen,” said Azzam.

Azzam stressed that it was vital to allow community members to participate, paint and heal because art is a reflection and representation.

“A perfect example that I can think of is when you’re watching a movie,” said Azzam. “When the main character is someone that doesn’t look like you, have the same lifestyle, share the same beliefs as you, you’re not looking at something and thinking, ‘I am the main character of my own story.’ Representation is important because you see someone or even a piece of artwork and you’re like, ‘Wow, I relate to that.'”

This was my first time being part of a Milwaukee mural and when working with the community I realized that public art is an extension of storytelling. Murals become part of the neighborhood ecosystem, it connects community members and sometimes its a display of public demand and advocacy.

The Muslims for Black Lives community mural is located on Holton and North Avenue.