DACA student shares the realities of immigration in Milwaukee

DACA student shares the realities of immigration in Milwaukee 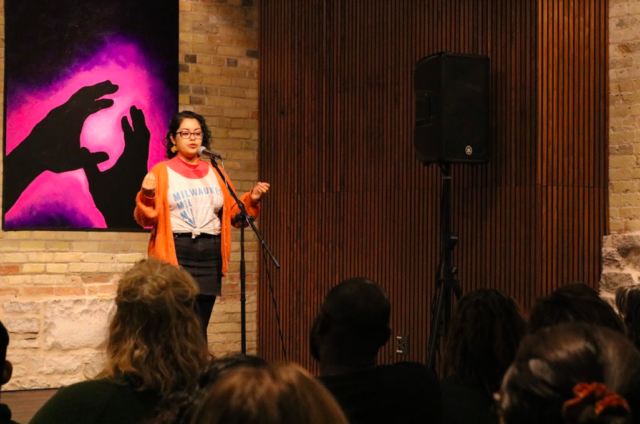 More than 1 million immigrants arrive in the United States each year and Milwaukee’s diversity is because of the immigrants that live within our city. This year we partnered with Ex Fabula and Nō studios to bring a Community Stories Live event called “Coming to Milwaukee, Immigration Stories,” where multiple Milwaukeeans share their experiences with immigration. Iuscely Flores is a UW-Milwaukee student, she came to America when she was four with her parents from Durango, Mexico. When she was nine, they settled in Milwaukee.

This is her full story.

“I am undocumented. I have DACA, but I very much side with my undocumented community because DACA is not enough. I came to the U.S. when I was four with my parents; we migrated from Durango, Mexico and we traveled to a couple of places within the States then finally when I was nine we kind of settled in Milwaukee. Proud product of MPS, and then some UW-Oshkosh, some UW-Milwaukee. It’s kind of expensive, so I have a year left.

“My mom, she was the beautiful American housewife, I would come home from school and she would have fruit for me while I was doing my homework, she really couldn’t help me because there were language barriers but we had to fundraise to get traditional folklore outfits to perform and she made 500 empanadas and we had enough money for the folklore uniforms and just outfits. The performances were wonderful and she chaperoned the whole thing and choreographed some of it. It was just amazing how much involvement she still had regardless of the language barriers. Because my dad was always working they always assumed my mom was a single mom because she always came to my conferences by herself.”

Flores heartbreakingly describes the moment her father told her about his difficult decision, one that ended up changing his family’s lives forever and one he made in order to protect his family.

“But three days before Christmas of last year my parents self-deported. At first, I was really angry, right? What can I do to keep my parents here? What is this process going to look like for me? Being undocumented, I really had to prep them and be like, ‘Are you sure this is what you want to do? I won’t be able to see you for ten years. If I want to walk down the aisle my dad won’t be able to walk down with me. If I want to bear children my mom won’t get to feed her grandchildren.’

“I knew that the longing that I feel when I go on vacation somewhere for Milwaukee, my dad felt for Mexico. I had to understand that this had to happen. We went to the Mexican consulate and my dad was like, ‘Well, I want to self-deport, can you help me?’ This man has been working for the Mexican consulate for fifteen years and he’s never met somebody that wants to self-deport. He can’t believe it and neither can I.

“Three months before my parents actually self-deported, I was on Google and just searching, ‘How to move back to Mexico? How to self-deport?’ and within all that, I found that most of these websites were catered towards white people that were moving to Mexico because some of them were like, ‘How to avoid paying taxes in Mexico? How to get the best dental system in Mexico?’ So I just knew this was something that wasn’t really made for my parents.

“I was like, ‘Are you really sure?’ Just reminding them why they left, like ‘you left because the North American Free Trade Agreement just generated way more poverty and in Mexico. It influenced drug cartels and organized crime’ and my dad said, ‘I’d rather be free and poor than rich with no liberties.’ And him being a contractor and just always driving, place to place he was this fearless man but then with the political climate he became a little fearful and he had to do what was best for his family.

“The American Dream that my parents ever so vividly provided for me started to become a nightmare. I really just believe that it is too late to feel sorry for people in my situation and the time to really act is now.”