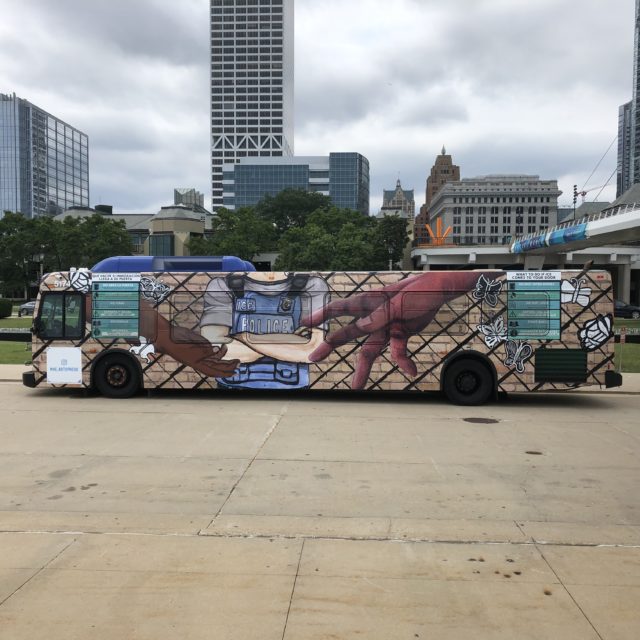 Milwaukee Art Museum interns designed a county bus as part of the program ArtXpress, to address an issue that impacts Milwaukee. This year, the bus mural dealt with immigration and deportation. On one side of the wraparound mural, there are two hands reaching towards each other with an ICE agent in the center.

Brigid Globensky, the museum’s director of education, says the teens picked a strong topic because young people are interested and passionate about the world around them.

“The bus mural was done out of a concern for students’ neighbors, for their family, for their friends and wanting people to know what their rights are,” said Globensky.  “But also as a real pride in Milwaukee, that we are a city of immigrants and to celebrate that.”

The mural has two infographics in both Spanish and English titled “What to do if ICE comes to your door,” listing rights to immigrants. The message wasn’t universally seen as impactful. There’s been criticism from the public and County Supervisor Dan Sebring called for the removal of the ad in a news release.

“The racist, anti-law enforcement messages contained in the Milwaukee Art Museum’s paid ad on a county bus is an offensive abomination and a slap in the face to law enforcement officers and officials at every level,” said Supervisor Sebring, in a news release.

This is the 17 year for the ArtXpress program and they have dealt with a variety of topics across the broad.

“We’ve dealt with segregation, homelessness, mental illness, gun violence we’ve done it all,” said Globensky. “This is the first time there has been any kind of controversy or call to take down what the teens have produced.”

If we look back at our own personal growth, our late teens are a point where we figure out our place in the world. We might be off to college or starting to make our way towards independence. ArtXpress gives teens the tools to express that transition and provides a platform to be a part of the conversation.

“I’m so proud of our teens,” said Globensky. “The fact that they took to heart our charge, which was, ‘Here, here’s a public platform for you’ to think about an issue that’s important not only to you but to the city of Milwaukee, and what do you want to say to the city and they said something.”

Art was never meant to be safe. It’s a reflection of life and life is complex. Whether one’s position is for or against the bus mural, a conversation is happening. We are given the chance to listen, be open and understand people’s values and opinions, as well as an opportunity to talk.