How one Facebook group brings a Milwaukee neighborhood together

How one Facebook group brings a Milwaukee neighborhood together 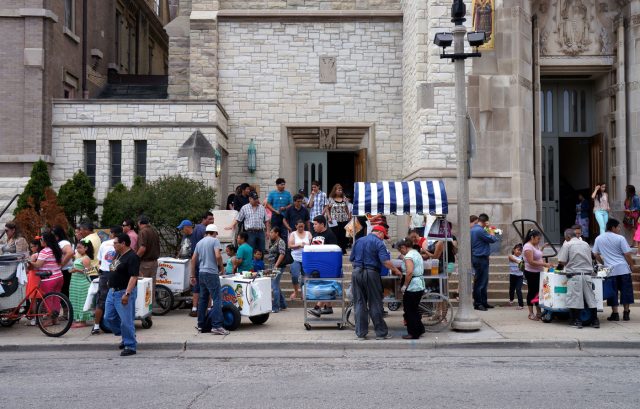 The Facebook group “Milwaukee Southsiderz” is more than 20,000 members strong, and blurring the lines between online connections and real-world, real meaningful interactions.

It’s late April, and Robert Wilson, originally from Oconomowoc, is near rock bottom. He has a job on the city’s South Side, and a room to sleep in, but that’s about it.

“I moved here with some clothes and nothing else,” said Wilson, who relocated to from Waukesha to Milwaukee for a job in 2015. Just when he thought things couldn’t get worse, they did, when the owner of the home he was staying in tossed out his diabetic medicine, belongings and then him.

With nowhere else to turn, Wilson decided to write a post on the wall of  “Milwaukee Southsiderz” a Facebook group he joined shortly after moving to the city, acknowledging his predicament.

Offers of help poured in. First came a cheap room to rent, then came bus passes, cash, a TV, clothes and other odds and ends. Southsiderz also reached out to the woman who gave Wilson the room to rent. Help literally arrived by the truckload, as members dropped off beds, a couch, refrigerator, stove, dryer and a kitchen table for the home — all for free.

“I even met someone who took me to church with her every Sunday and filled our house with food; And I mean filled,” Wilson said.

What happened to Wilson and the woman was no anomaly. Calls for help from members of the Southsiderz, which range from requests for advice, car repairs, food, baby clothes and cribs, to help finding lost dogs or even lost children, are answered with regularity.

Recently, members of the group organized a redo party for a 7-year-old-girl, devastated when no one showed up to the original party. Kerry Biggs Malczewski, who said her son has handicaps and few friends, always feared the same would happen to him.

“They not only invited us to the party, but, they sang to my son and the little girl,” Malczewski said.  “They welcomed us like family even though we’d never met them before, said Malczewski, adding that a boy who recently had two open heart surgeries was also included in the celebration.

It became a place where social media could actually make a difference in our community. -Anthony Figueroa, Southsiderz Founder

Members of the Southsiderz group are part of a growing trend of people who in addition to utilizing traditional routes of help-seeking, such as going to food pantries, non-profits or turning to family, are also reaching out to a de-facto family of sorts — their online kin.

“They’re like my family too,” said Tina Barajas, referring to members of the Southsiderz group she joined two years ago.

Barajas, born and raised on the south side, said she joined the group because many of its members have a lot in common and are willing to help each other. That’s not always the case in real-world interactions, she added.

By most accounts, real world interactions are harder to come by, even in close-knit communities such as the near south side of Milwaukee. The near south side, generally thought of as the neighborhood bordered by West Pierce Street on the north and West Lincoln Avenue on the south, is a community in constant transition. Once home base of much of the city’s Polish population, it long ago became the landing point for Latin American immigrants and eventually the majority of the city’s Hispanic population. The neighborhood is currently in the midst of another transition, as the African American population in the area continues to rise. The neighborhood is a true melting pot.

Most members of the Southsiderz group reside in or have history there. Another commonality of its diverse residents is that many are poor. According to American Community Survey data, 44 percent of individuals in the 53204 ZIP code area, which encompasses most of the near south side, live below the poverty level, which could be one reason the group serves such a vital function in the community.

“If you need diapers, food or even clothes there’s always someone willing to help you,” Barajas said.

According to Caroline Haythornthwaite, a professor at the School of Information Studies of Syracuse University and researcher of online communities, the evolution of the internet has resulted in a world where on and offline is mixed. People look to their online communities for access to resources and to people as sources for needs, she said.

“And [Facebook] is a place to voice concern, help, immediately, remotely, and to those with common need and interest,” Haythornthwaite said.

Southsiderz founder, Anthony Figueroa, who moved the page, originally created on Myspace, to Facebook in 2010, said what he sees happening is an extension of what he always considered the strongest trait of Milwaukee’s south side residents — their willingness to help.

“Growing up I met a lot of different types of people on the south side — gangsters, wanabee thugs, churchgoers and everything in between. But, I could see that no matter what was going on in the neighborhood, people were always ready to lend a helping hand,” Figueroa said.

Figueroa, who bounced from home to home but generally grew up on or near West Greenfield Avenue, watched the group’s membership explode from 1,000 members in 2013, to more than 8,000 a year later. Currently, the group is over 23,000 members strong and serves more functions than ever before, facilitating things like school supply, clothes or food drives as well as serving as marketplace for products and services.

Similar to craigslist, sale posts from members advertise new or used products for sale including shoes, video game systems, and furniture, though some sell Indian tacos, plates of steak stir fry with white rice, or even enchiladas. Service related requests are also common, with members constantly on the hunt for an alley mechanic or someone to fix the cracked screen on their electronic device. Other members offer to cut grass or paint rooms for cash, while employees of temp agencies reach out to members in attempts to fill jobs.

Peggi Christiansen took the marketplace one step further. She and her husband, Kevin, sold their five-bedroom Victorian style home on West Madison Street after the realtor they met on —you guessed it — Southsiderz, advertised it on the group’s page.

“Somebody saw the pictures of the house and ended up buying it cash,” added Christiansen, who said the process took just three months.

As a way to pay it forward, Christiansen’s husband performs repairs on the cars of other Southsiderz, usually charging members only the cost of the parts.

“At one time he was a single dad who was about to be homeless; so he knows what it feels like to be struggling,” said Christiansen.

Katrina Raisler, who joined Southsiderz 5-years-ago, utilizes the group to find and rescue animals. She and two other friends monitor the page daily as part of their efforts to provide resources like food, treats, collars and leashes for chained dogs in Milwaukee. Using donated funds and supplies the group provide supplies. If the canines are in very bad shape, they call police, but if they’re not abused, they offer the owners help by providing supplies, most of which are collected through donations from Southsiderz group members and others.

“In the last two months we were able to deliver dog houses, and everything else that was needed for three dogs who lived outside 24/7. “The southsiderz has been a huge help in us being able to find these dogs and provide the help needed,” Raisler said.

Local leaders have also taken notice of the reach of the group.

Peggy A. West, County Supervisor for the 12th District on the city’s south side, said she’s found the page to be an effective way to inform her residents about upcoming events and other opportunities.

“I’ve used the page to recruit volunteers, post links to surveys on different county issues and to pose questions to my constituency,” West said.

She said she also addresses concerns posted on the page by directing members to local resources.

West and several other local leaders, including 12th District Alderman Jose G. Perez, were among the attendees at the Southsiderz picnic last year at Jackson Park. There, they joined District 6 police officers and hundreds of group members for a family style potluck barbecue.

“We had so many people attend that we ran out of food at one point so some members left and came back with more food; that’s what you call Southsiderz love,” Figueroa said.

But, not all of the group’s interactions are so rosy.

“I met a lot of good people on the page and one I thought was good but ended up causing me problems,” said Wilson, who chose not to elaborate.

Posts from members looking to sell or buy drugs pop up occasionally on the page, though they’re quickly deleted, and poster warned that another offense will result in a ban.

Posts regarding the re-homing of pets, name calling or bullying are also not allowed, according to Figueroa. Sometimes, as was the case with the controversy involving the English-only policy at Leon’s Frozen Custard, which has since been rescinded, members become embroiled in heated, not so friendly debates. While many members viewed the language snub as reason to boycott the establishment, others fought to protect Leon’s, considered a south side institution.

Figueroa allowed the conversation to run before deciding it was no longer productive. He began to remove posts and comments about the situation he deemed divisive. In fact, Figueroa, along with a handful of volunteer admins, monitor all posts on the page, together deciding whether or not posts should be removed, among other items.

Marisol Delacruz, a lifelong south side resident and stay at home mom, became an admin last year. She she chose to become more involved with the group because she admired the love and compassion members showed one another.

Originally, said Figueroa, he started the group as a way to reconnect with other south siders, before realizing its purpose had evolved.

“It became a place where social media could actually make a difference in our community,” said Figueroa.

Finding a purpose for online communities such as the Southsiderz is a process facilitated by group members, according to Haythornthwaite.

“[The group] gives a place for a voice, whether you are the only one who hears it, or, as is more likely, it is heard by others with common interest — and a common co-orientation to the importance of this information and or Facebook group — is found,” Haythonrthwaite said.

Though identifying an overarching function or purpose of the group might impossible, there is no doubt that it plays a vital role, both online and off, for its members. Local artist, author and Milwaukee enthusiast Adam Carr, who moved to the Burnham Park neighborhood on the south side two years ago, said long-time residents tell him the page is like the area’s main street, like Mitchell Street in the 70s or 80s — where you’d find the pulse of the neighborhood.

“The south side is a big, complex, fascinating place, and this Facebook group feels like it reflects that community in a meaningful way. I don’t know of another online community like it,” Carr said.