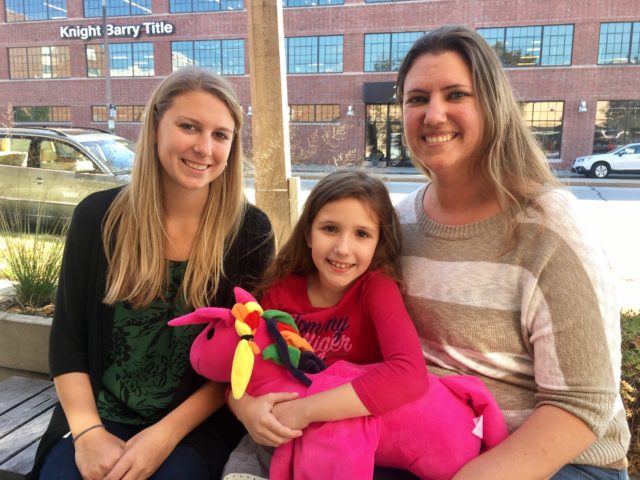 Cystic fibrosis attacks every cell in the body.

The lungs and digestive system are the hardest hit.  Nutrient absorption is reduced, and mucus builds up in the lungs, making it difficult to breathe.

It is a rare, genetic disease affecting about 30,000 people in the U.S.

And there’s no cure.

In addition to its daily effects, it also reduces a patient’s life expectancy to 35 to 45 years.

7-year-old Neely Henry was diagnosed with CF at just two weeks old.  It was a scary diagnosis, said her mom, Danielle, especially since her family had no experience with the disease.

Neely requires daily breathing treatments, a specialized diet, and occasionally, use of a feeding tube.  But, despite the intensive care, she’s a kid first.  She loves to draw in her sketchbook, creating her own characters from her imagination.

There are good days and bad days, Danielle said, but keeping a positive attitude is key.

“We’re going to keep plugging away, doing what we do to keep her as healthy as we can, as long as we can, until they find a cure,” she said.

While there is no cure for CF, a national foundation is working on a global scale to advance research.

The Cystic Fibrosis Foundation was founded in 1955 and has been the driver of new treatments and drugs, according to its website.  It has local chapters throughout the U.S., including Wisconsin, and relies on donations from individuals for its funding.

Locally, the nonprofit runs a program called Milwaukee’s Finest, a fundraising effort geared toward young professionals.  The campaign seeks nominations from area companies to recognize employees who are especially engaged in community work, and it challenges them to raise money within their networks.

Wiegele works with the local branch of Ernst & Young as a manger in tax practice.  She met with the Henry family and said she built a connection with Neely immediately.

“The first time I met her, she was sitting on my lap already, telling me her story,” she said. “She was the happiest little girl.  Nothing phased her.”

Tapping into her network of professionals and her family, Wiegele raised more than $10,000 for the Cystic Fibrosis Foundation and was the top fundraiser in the Milwaukee’s Finest program last year.

“I know I’m fortunate with my health and my life, and so I like to give back to others who are less fortunate,” Wiegele said.

Nominations for 2018’s Milwaukee’s Finest program are being accepted until February 8.

Click the player above to hear from her Wiegele and the Henrys.