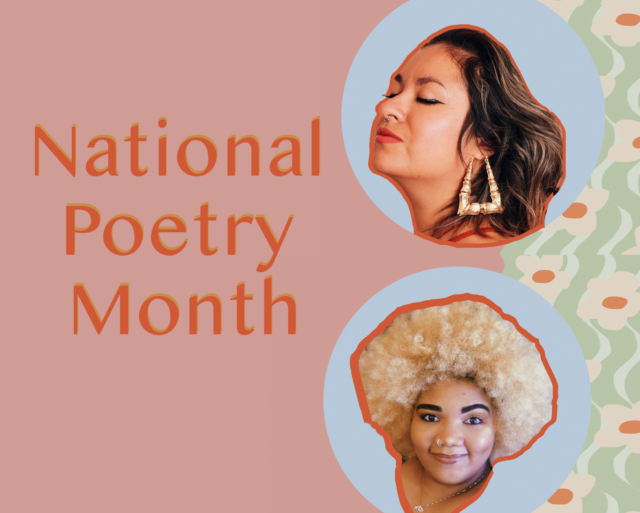 April is National Poetry Month. Here at Radio Milwaukee we partnered with Red Oak Writing to feature Milwaukee poets reciting their work to celebrate the craft and honor those who are making a mark in our city.

Acosta is a multi-disciplinary artist exploring the themes of loss, identity, motherhood and reclaiming self. She emphasized that poetry is a personal choice to express some of the most vulnerable and intimate experiences of her life.

“The act of writing and documenting is my decision to be heard in a world that would prefer I stay silent,” said Acosta.

Of our first date
of the many times
you asked me out
and I kept
saying no.
And of the time you asked
one last time
and I finally
said yes.

You took me to
the Indian restaurant
you knew I loved.
Where we shared our first laughs
and food comas
and sweet chais.

Where we went when I had mad cravings
when our son was in my womb.
And were we went as a family
on Sundays after he was born.
Then went home and napped
on full bellies.

I haven’t been back
I don’t go near it anymore
I don’t crave it
The wound is still sore.

Today our son asked
for Chicken Tiki Masala
and I asked you to take him.
You said you hadn’t been backand this made me think
that maybe…
you were sorry.

That maybe
this place
haunts you too.

Rozga is the Wisconsin Poet Laureate of 2019-2020. Her poems are cultivated from her own life experiences. Many of her resurfacing themes are on social and racial justice.

Cake and Lemonade for Neighbors
Where I want to live
neighbors gather
on front porches, watch
their children play
across multiple front yards, laugh
in Spanish, Arabic, Burmese, English, talk
about back-in-the-day, share
sweet and savory snacks, lend
each other a cup of sugar or flour, borrow
hedge trimmers, a shovel, or rake, help
with chores when need be, apologize
when need be, offer
a word of advice (not more), drum,
strum guitars, and pluck banjos, make
a little noise sometimes, sometimes bring
out a kitchen chair so everyone finds
a comfortable place to sit
on the unscreened
wide or narrow porch
or on the stoop.
Sometimes just enjoy all
black brown white
golden quiet together

Michaela Lacy is a 20-year-old writer and spoken word artist. She runs an open mic called Sacred Garden and was the Youth Poet Laureate in 2018 for Prince George’s County Maryland.

“My poem highlights the challenges women face with domestic abuse,” said Lacy. “The dangerous cycles we can find ourselves in if we aren’t aware of our history.”

Generational Curses
I wonder was god in the room.
Were chairs set aside for 16 angels to watch and guide you in execution of this ritual?
Did you wash your hands first?
Pour 3 times into your right and rub the soap into your left?
Did you raise your hands in prayer, Before you raised them at her face?When my great grandmother walked into your bedroom, did she mistake the candles lit for romantic purposes?
When you slapped her did her chest cave in as if her soul was being ripped from its vessel?
When you made a sacrifice out of my great-grandmother’s body…
Did she fall to her knees for your mercy?
Did you forgive her? For the bloodstains she left on your floor?
Did you forgive her? For the shriek she pierced the holes of your ear with?Did you forgive her? For whatever made you do it in the first place.
Did you know, that your hands came with a ripple effect?
That your slaps, could be felt on the faces of your descendants four generations later?
Did you know that you breathed life, into a demon that would haunt the bedrooms of all the women in your bloodline?
Did you know that you marked a blueprint for the men to love your granddaughters the “right” way?

In the tradition of men in my blood, The man I loved left a bruise on my face and I still loved him after.
Consumed by the belly of an untaught ritual.
Swallowed whole by a man, craving to make me half a woman.
Raised to fill up shoes but to never take up space
In the tradition of women in my blood,
I fell to my knees at him.
Kneeled in my own blood pool and sought forgiveness.
Wiped the mark from my cheek with bare hands and a closed fist.
Repented for a sin I knew not I was committing
I wonder if god were in the room
To witness the heathen I had made of myself
To the man, who laid my body at an altar and made an offering out of my skin.
Did you know you remind me of my great-grandfather?
A butcher, able to shed the skin of a woman only using his bare hands.
When you made a sacrifice out of my body,
Did you know I’d still love you after?
Did you know that me still loving you after had nothing to do with me still loving you after?
I just don’t know how to break tradition
Did you know, I am sick of the women in my bloodline never being able to break tradition?
Passing down battle scars like sweet potato pie recipes.
Never tasting the salt that forms in your mouth when a man makes a ritual out of your body.
To the man, who walked in the blood trails of my great grandfather.
Did you know my hands held history?
When I slapped your ass back, did you know that my great grandmother rose from her coffin and grabbed a chair just to watch me?
I’m sorry that I made a sacrifice out of your body but I just…had to break tradition had to set a blueprint for the men to love my granddaughter the right way
Had to assure that no more women in my blood would be cursed by a man Like my great-grandfather.

Lilo Allen is a poet and self-described her discipline as, tongue sharper than most swords. She is the owner of Papyrus and Charms, a jewelry line of culturally conscious goods from Jamaica.

Hair Grease
Before Frank Lucas,
Black girls had that blue magic.
Scalps shiny like eyes on candy dishes at Grandma’s house.
You knew you were leaving with a pocketful of strawberry print wrappers.
You never knew where she got them from. And you never asked her.
I remember singing to TLC with my cousin and me,
She gelled my edges down with Let’s Jam, and jam we did…arguing about our favorite member of Immature
we were so immature…
we laughed then we cried or rather I cried
cause she started my braids off too tight.
I reached my hands up to my head like a prayer…
asking God for the pain to be over soon.

I pretended to scratch like I had an itch on my back
while checking to see how many sections she had left to braid…
damn I miss those braids..
damn I miss being a lil girl on the North Side
unaware that I was from the rough side of town.
37th and Center and we was “Treys” all day
while we played all day…
black babies performing miracles
like Jesus or Neo
by dodging bullets all day we ran astray
Till we was told to take our ass in the house by the street lights
Never had to be told twice.
It was just common knowledge so technically since a shorty
we been “speaking light”.
And shine like the sun we did.

Before Frank Lucas, black girls had that blue magic.
We used to sit in between our mama’s legs
and it was like being born again.
Her fingers parted your hair like a thousand red seas
and she was Moses.
She was an artist and she transformed your field of knots
into a river of barrettes…The Supreme Architect,
she literally changed your geography…
and how Godlike was she.
Mama knew that her hands held the power
to sculpt you into the woman
You didn’t know you would become…
mama knew that in life you would experience
Pain that you couldn’t run from.
So she smacked your hands with the brush
Every time you were in a rush
to go nowhere fast, slow down baby girl

She humbled your fingers and made sure you knew that greatness required patience.
Mama knew if you moved too fast
that you just might get burned,
So she wielded curling irons like weapons
and cursed us heavy every time our head turned.
She made sure we learned to sit up straight,
eyes forward and wait for the day when
little black girls, who scalps shone like pavement after downpour…
Realized that blue magic prepared us for the black magic we hold it down for.

Annie Grizzle is a poet and sound maker living in Milwaukee. To her, poetry is where she finds freedom and where she doesn’t have to worry about being wrong.

“The sections that make up this piece felt the most viscerally Milwaukee, to me,” said Grizzle. “They were all written here, feeding off the momentum of the city.”

Water poem
There are no sounds when it snows in Milwaukee at night. Night is a different space entirely. Lights turn, no sound. Head engines, no sound. Moving particles, no sound, no sound.

The whole world of an inside existing.
Vibration flushing mad on this concrete completely
compulsively
Wildly sugar

Four girls cross a street together one mosquito crosses alone four girls talk and no sound comes out a mosquito trips and recovers joins in the conversation.

A mosquito continues the conversation.

A mosquito walks down a sidewalk alone two women walk behind it together a mosquito keeps talking but no sound comes out two women ask a mosquito why it’s crying.

One car drives down a three-way in opposing directions three cars pause politely for no stop sign three streets have one-stop sign and one-stop sign asks a favor.

One mosquito asks sixteen cars about its chances.

Sixteen drivers forget an animal four mosquitoes ask them to verify those facts.

Someone may have said the comfortability of beings depends on these many small things, many small flecks of shining mega universe closed and so open

in the wind and currents and

and before it thaws,

there’ve been many times in my life where I’ve found myself thinking I was on the other side of something, though I don’t necessarily know I ever was.