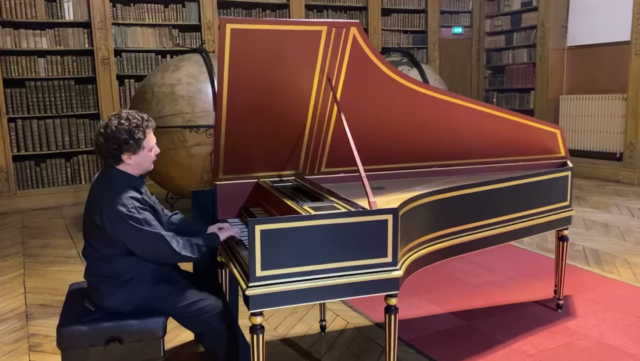 Like musicians and bands, opera singers rely on live performances and venues to share their craft. When the pandemic hit, Maggey Oplinger, general director and CEO of Florentine Opera, says that the company found itself in a peculiar situation right as the pandemic was hitting.

“As classical singers we train our bodies to project sound in huge theaters without microphones,” says Maggey.

Classically trained singers, Maggey says, often have more than one advanced degree where they’ve learned how to project their voices in large theaters like Uihlein Hall at the Marcus Center, which seats 2000 people. That training means they can push sound across the room and potentially germs if a singer was carrying the coronavirus.

“Classical voice uses space as a component in the acoustics of performance and the exact training that allows our air to go so far and carry sound so far,” says Maggey. “Obviously, air does not go all the way to the back of that giant hall but the sound does so in the process of that singers are super spreaders.”

Maggey says before the opera went all virtual, the company held outdoor performances and had to keep its singers about 20 feet from the audience. They also had to ensure that after performances the audience didn’t go up to greet and thank the singers

There are a lot of logistics to think about in producing operas during the pandemic. Superspreading by powerful voices is one thing to consider. Maggey says the company also has to think about how it’s going to keep productions entertaining when it switched to video.

“We need the theater, we need all of the technical components of the theater and the backstage space to create,” says Maggey. “I don’t know that anyone wants to sit down and watch two to three hours of a show from their home. without the benefit of that beautiful acoustic impact, we get in person, it’s just not the same.”

As a theater major in college, I can attest, the combination of stage, audience and performance creates its own buzz. However, if you’ve seen “Hamilton” on video or even “Bridgerton” on Netflix, you know that powerful voices and beautiful costumes can translate on video.

Here’s Maggey on some of what they’ve done.

“Some of the environments we’ve been recording in are very different,” says Maggey. “I’ll use the example of our Shakespeare performance. We were recording in the equivalent of an old English tavern but it’s actually built into the lower level of a cool house on the East Side. You truly feel like you’re stepping into something like the Globe Theater.”

Maggey says that in filming the performance there were a lot of guidances they had to adhere to, like timing of set up and physical spacing between personnel.

Maggey says that the opera community at large has been helping each other. There are organizations in other countries that have helped pave the way for how theaters and opera spaces can, when time allows, reopen safely.

Speaking of other countries, Florentine Opera has been putting on performances from literally across the globe. They’re producing a recorded show in Burgundy, France. One of their harpsichord players lives in Burgundy off season so a lot of coordination is going through them. Maggey says the Burgundy performance is part of their Voyager series where they’re getting audiences out of their homes.

“I really love doing rich, full opera for little kids,” says Maggey. “We have a tendency sometimes to be worried that kids won’t engage and dumb it down a little bit. And it’s a perverse pleasure of mine to take sophisticated full on grub opera and take it into a school because the reaction is thrilling.”

Last year they put on “Cinderella” for the kids. This year they’re live streaming a performance of “La Boheme” set in Milwaukee’s Bronzeville neighborhood during the late 1940s and early ’50s.

There’s a lot to coordinate despite opera gone digital. But the show goes on just digitally and socially distanced.