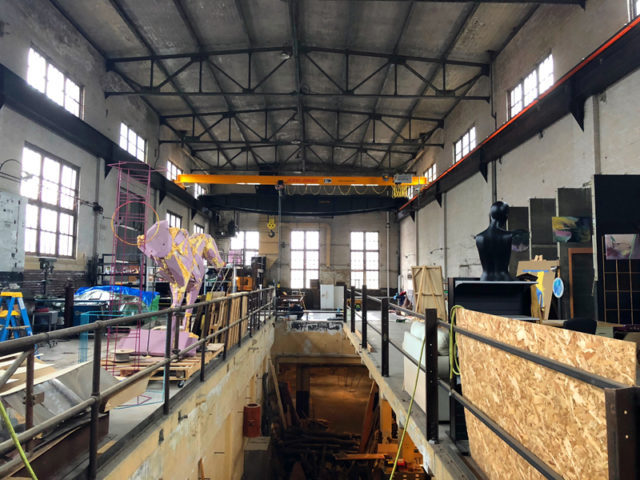 Impressive both inside and out, the former Milwaukee Electric Railway and Light Co. substation at 20th and North Avenue is a dream space for creatives.

Soaring ceilings, huge windows spilling natural light, ample exposed brick, even the original control panel for an industrial crane remain, even after being decommissioned by the utility company in the 1980s.

Now after extensive rehab, the space has been reopened as a working space for multiple artists.

Brothers Keenan and Ryan Lampe and Jacqueline Joyce (aka Jax) bought the building together and named it 20 Ton Studios after its most distinguishing feature — the crane with the 20 ton lift capacity.

In addition to making their own art in the space, the trio also hopes to open a gallery and add to its roster of resident artists. Right now, they’re taking it slow.

“It is a future goal of ours to be capable of employing interns and hosting visiting artists,” according to the 20 Ton website. “Our ability to do so will largely depend on our rate of growth. We must first employ ourselves.”

“We have an operating agreement and we try to get everyone that’s going to be in here as a full-time member,” says Keenan, quoted in an article written by OnMilwaukee’s Bobby Tanzilo. “They start as a probationary member. Then we do some meetings, see how it’s going, and bring them on in full.”

Listen to this week’s podcast for more about the building’s history, and be sure to read Bobby’s complete story at OnMilwaukee.com.

Get all 88Nine’s podcasts delivered right to you weekly at RadioMilwaukee.org/Podcasts. We’ve got podcasts about music, food and and film, with fresh episodes dropping every week!