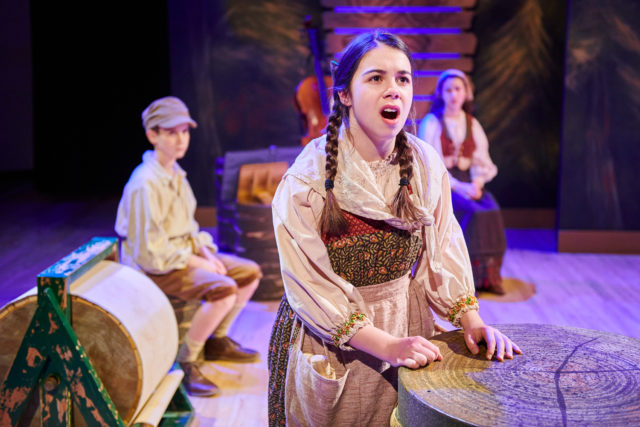 There’s a common trope in storytelling and once you learn about it, it’s easy to spot. The template is called “A Hero’s Journey” — the protagonist goes on an adventure, has a crisis, wins a victory and comes home transformed. Many stories follow this guideline, including “Harry Potter,” “Lord of the Rings,” “Star Wars,” “Finding Nemo” and First Stage’s production of “GRETEL!“

“GRETEL!” is a live folk-rock musical starring Gretel, a young girl with an absent father and deceased mother. Gretel heads to the wilderness to find a witch named Baba Yaga and learns valuable lessons along the way.

“The world is sometimes indifferent to our pain,” said Jeff Frank, artistic director at First Stage, which staged the show earlier this year. “It’s your choices, as the world keeps moving forward, that defines who you are going to be.”

One thing that makes “GRETEL!” special is the main character. There aren’t many examples where the hero of a story is female, let alone a young girl.

“I read a lot of literature about how young women aren’t given permission to be angry,” said Frank. “If a young woman is angry she can be perceived as something else. The fact that you can own your anger and decide what you can do with that anger. Gretel is faced with a difficult decision and she uses grace.”

Frank says the true message of the production is when Gretel finds her courage and stands up for herself as she sings “Survive,” a song she performs after Baba Yaga gives her an impossible task of counting all the stars.

“She’s at the deepest moment of despair and she’s completely alone,” said Frank. “In that song, she recounts all the things she’s done and recognizes the strength she has found.”