‘Hamilton’ has finally arrived in Milwaukee, and it lives up to the hype

‘Hamilton’ has finally arrived in Milwaukee, and it lives up to the hype 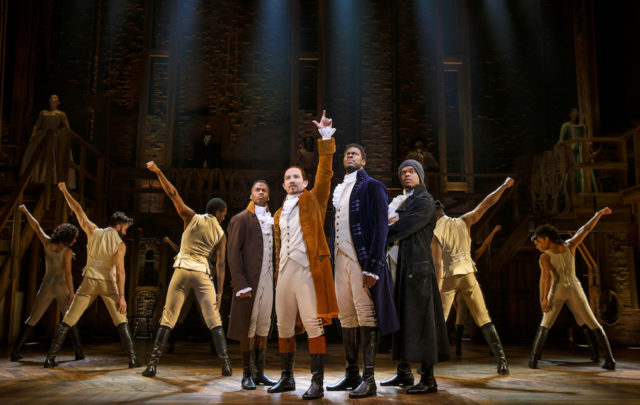 “Hamilton” kicked off its four week run the night before, and a group of 88Nine staff was invited Wednesday to see the production. And we agree, it was unlike anything we’d seen in Milwaukee.

After taking a moment to digest our feelings and reassemble our blown minds, we took to Slack to talk about our experience. 88Nine’s Tarik Moody, Sarah McClanahan, Justin Barney, Ayisha Jaffer and myself weigh in.

Nate: Haha #blessed indeed. And, no surprise, these are hot tickets in Milwaukee, too! For good reason, this show had so much going for it. This was everyone else’s first time, right?

Nate: One word to describe your experience. Go!

Nate: *looks up word*
In·im·i·ta·ble, adjective
“So good or unusual as to be impossible to copy; unique.”
Accurate.

Sarah Mac: It’s the word Burr uses to describe himself in “Wait For It.”

Justin: Expected. I mean, we knew it was going to be great. And it was great. It delivered.

Nate: For me it was “captivating.” Is there a better word for that? I can’t remember the last time I saw a show and was so dialed in. Every verse, every character had my complete attention.

Tarik: I have never seen a musical like that. I would call it perfect musical for those who don’t like musicals. It was surreal to see the performance full of people of color, juxtaposed with the theme of the founding fathers, with the message delivered via hip-hop.

Ayisha Jaffer: Ethereal. Or effortless. It literally felt like I was watching a DJ set as they mixed in the next actors and next sets, effortlessly as they mixed out what had just happened. It was a beautiful blend. The DJ delivered, and I ate up the execution. It is unconventional and refreshing for the formula of musical theater which is what I look for in art, something fresh. I would say the actors and technical staff got more comfortable and improved their performance throughout the set, so it only got better as they opened this theatrical event. The next performances should only improve.

Justin: I’m going in as a person that sees maybe one play a year. I love art but the theater isn’t necessarily my chosen medium of expression, and I’ve never felt moved in the way that I feel moved with music or movies. So I haven’t seen that many plays, and I don’t have the kind of understanding of the medium. Like Tarik, I’m not huge on musicals. I was a little afraid that I would lose the plot by not being attention to word-for-word what they were saying, but all the feeling was there. For being a subject that is stuffy and old, like, literally about writing legal documents, the play brought so much excitement and life to the subject.
I mean, most of what I’m saying here is old news. “Hamilton” became a world-wide phenomenon because of that, but that’s the beauty of bringing it to Milwaukee. It hits closer to home, literally.

Nate: What was everyone’s favorite moment? No spoilers!

Tarik: My favorite was just the dynamic between Jefferson, Burr and Hamilton. Especially the “rap” battles.

Justin: Um, can we talk about the king?! He had this glee that some great villains have. Everyone wants what he has so bad, and he just kind of doesn’t care. And I loved that. I could watch a whole play with him.

Ayisha Jaffer: Definitely a huge fan of the king, I thought he played his part effortlessly and with the perfect amount of hilarity and sassiness but my favorite moments were honestly the transitions, they were mesmerizing, beautiful transitions that felt like you were in someone’s dream.

Sarah Mac: And he helps with transition in a show that doesn’t have a curtain close between scenes.

Nate: I think my favorite parts were the full ensemble numbers. “Yorktown (The World Turned Upside Down)” was absolutely thrilling, electrifying, moving. It gave me everything. Then for that song to be followed by “What Comes Next?” sung by the King George…such a great contrast.
I had that magic combo of emotion and humor within a minute or two.

Sarah Mac: Controversial opinion: I think Burr was too cheeky/funny.

Tarik: I think the Burr and Hamilton relationship was similar to Tupac and Biggie.

Nate: Interesting. I was wondering how much this cast’s performance differed from the original cast, like in what ways the actors made their characters their own. With something so revolutionary and new, the bar is so high already.

Sarah Mac: Last night’s Burr definitely made the character his own. The original Burr, Leslie Odom Jr., was much more calculated. He still poked fun at Hamilton, but he held it together much more. Last night’s Burr you could tell was trying hard to keep himself smiling and not sharing his opinion vs. Odom’s Burr was so good at keeping himself together that it wasn’t until a bit during “Wait For It” and ultimately during “Room Where It Happens” that you fully understood his motive/intentions.

Justin: One thing I really was impressed by was how it represented female characters. In the first half there were two female characters and they both kind of served the same purpose which was to love a man, and I felt, at the time, intermission, that it was the low point of the production. And I get it, this takes place in the late 1700s in an era where women’s stories were not acknowledged and now we seek for an equality that wasn’t there, but in the end, I felt in the story that they told it was the female characters who achieved in spite of their inequality that made for some of the most moving characters for me.

Sarah Mac: RIGHT?! The last song of the show is basically saying, “The only reason you even know about Hamilton is because of Eliza and Angelica.”

Sarah Mac: So I cried the first time I saw this. Didn’t cry last night. Did anyone else cry? Am I not human? Discuss.

Nate: When I said “emotion earlier,” that was code for crying. Lol. “Yorktown” had me. And, of course, in the second act when Eliza and Hamilton confront death, that was a powerful moment for sure.

Justin: I think that is a bit of the downfall of getting the production three years after it had it’s moment. I think if we had gotten it or I had seen it in the hurricane it was when it first came out I would have felt it a little more, but I still felt it.

Sarah Mac: “Hurricane.” I see what you did there.
But I agree, I think part of seeing it NY and balling, I don’t know, every three songs, was how fresh it was and the energy around it in the city and the country.

Nate: How much homework did everyone else do before seeing it? Did you listen to the soundtrack or just walk in?

Justin: So we may have missed the moment, but if it hadn’t come to Milwaukee many of us (me included) would have missed it entirely. So I’m glad that so many people in Milwaukee will get to see it.

Nate: Good point! @Tarik, were you familiar at all with the music or story?

Tarik: I was familiar with just bits and pieces. I knew the history of Alexander Hamilton and his duel with Burr.

I did see Lin-Manuel’s first musical “In the Heights” at The Rep last year. It was the use of hip-hop in a musical that intrigue me when I first heard about Hamilton many years ago.

Nate: I talked with the woman sitting behind me, and said she was loving the music and the performances but was a little lost. I have to admit there were times, too, when I felt like I was missing big pieces of the plot, especially in the second act. Either because of my unfamiliarity with the history or because I couldn’t follow the pacing. Would you recommend first timers go in cold or do a little reading/listening first, now having seen the show?

Tarik: I agree. In the beginning, I couldn’t make out what was going on, but it got better.

Justin: Wouldn’t hurt. Also, you would get to listen to the soundtrack, so lucky you, every song in this musical slaps and it was pure joy just listening to banger after banger even at moments when I wasn’t totally 100% positive of what was going on. Bonus points for when I did.

Tarik: I like how some of the songs reminded of me of songs I have heard on the radio.

Nate: It was cool to hear so many different kinds of music, of black music, represented. There was so much more than just rapping.

Ayisha Jaffer: I agree, I loved the diversity of the music and how it somehow blended in perfectly. To transition as vocalists in genre mentally as well as physically is A+ skills