Heading to Harvard and Marquette, these MPS seniors earned it

Heading to Harvard and Marquette, these MPS seniors earned it 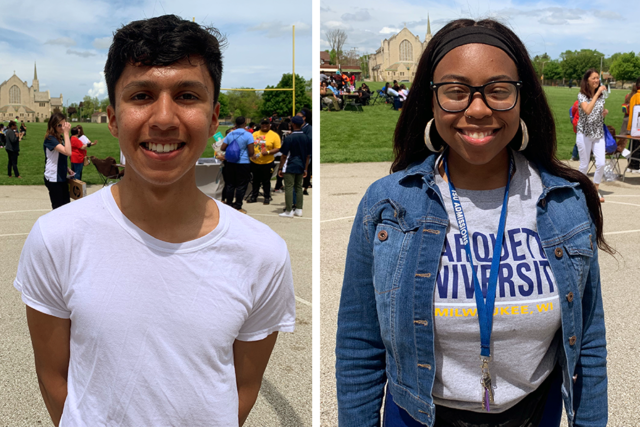 There’s reason high school graduation is considered a milestone. It represents the beginning of something, of a new phase of someone’s life. New responsibilities, new joys, new fears — all realized with within months of becoming a legal “adult.”

Situations and sentiments vary, of course, but in talking with many recent high school graduates, whether they’re heading to university, technical college, into the workforce or something else entirely, there is a palpable feeling of optimism.

We spoke with two MPS seniors who were recognized by their teachers to be among the top 20 students in the district. Meet Erick Torres-Gonzalez and Samari Price, heading to Harvard and Marquette Universities, respectively.

They share their perspectives on urban education, issues facing students and details on their next chapters.

Heading to Harvard in the fall, Torres-Gonzalez is the first student from Reagan High School to attend an Ivy League school. While he is officially undecided he plans to study either pre-law or pre-medicine.

In addition to rigorous International Baccalaureate classes, he kept busy with cross country, swimming and track. He worked full-time and was the president of Youth Empowered in the Struggle (YES), a program of Voces De La Frontera.

Price is a graduate of John Marshall High School and was selected as the MPS “Senior of the Year.” She was among 20 students nominated, along with Torres-Gonzalez, for the district-wide recognition.

This fall she’ll be heading to Marquette University where she’ll study criminal justice and business management with her sights set on law school.