Here’s what has been keeping us busy during quarantine

Here’s what has been keeping us busy during quarantine 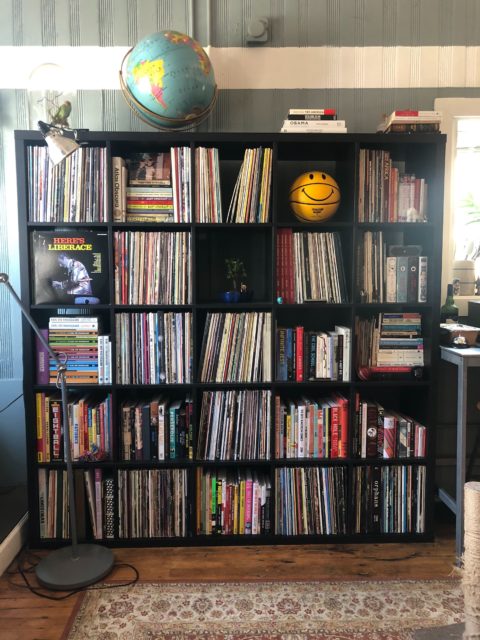 The quarantine has been tough, but we’re getting through it and hopefully nearing the end. With all of us working from home, the 88Nine staff has been staying in touch on Slack.

A few of us jumped on a new channel to talk about what’s getting us through the isolation. 88Nine’s content team including Salam Fatayer, Nate Imig and Lucas Seidel, along with Content Marketing Manager Amelinda Burich, Director of Digital Strategy and Innovation Tarik Moody and Music Director Justin Barney all came together for a quick chat.

What’s in your Ikea cube?

Justin: I remember when I was going down to Illinois to get this. I stopped into Rush Mor before heading down and I told Dan what I was doing and he was like, “I’ll come with.” And he literally shut down the record store for the day and we went down together and thank god he did because this shelf would NOT have fit in my Toyota Corolla, but it fit in his SUV, so he was a real savior.

Lucas: I’m fascinated by so much of what I can see in there.

Justin: The newest edition to the shelf and something that is giving me a ton of comfort right now are Serge Gainsbourg records.

Justin: So, I had to fill in for Marcus like two weeks before quarantine, and that meant that I got to do Sound Travels. I love old French music, specifically Serge Gainsbourg, so I did the whole day playing Serge Gainsbourg.

And the thing is, that I thought I knew a lot, but, turns out, dude released like 20 records, and I only had like three. So I have been buying multiple Serge records a week in quarantine and literally just eating up his discography

Nate: Talking about this guy?

Justin: Yep. The record that came in yesterday is “Gainsbourgh Percussions.” It was originally released in 1964 and not on any digital streaming platform. It was made at this time where “exotica” was kind of in vogue and the “percussions” part is the rhythm which is largely taken from African rhythms of the time. So it kind of has this feel of something Marcus would play from Africa in the ’60s and then with this French, very cool, spoken word on top. It’s so good.

Nate: Look at that ALBUM COVER!

Salam: These are all from a photo CD I have in a cube. That reminds me of my senior year, haha.

Nate: YES!! Photos on CD! Those were the days!

Tarik: those are great

Amelinda: I don’t have a TV, but I have been doing a lot of workouts on Instagram and trying things like kitchen ballet and making use of my hand weights and kettle bell. I’ve read four books so far and logged a LOT of hours walking. About 8 miles a weekend day and 4 miles each weekday. I don’t own a cube, but I have thought about getting the long one to house records and my stereo – looked into it during quar, but shipping is $50. Maybe I’ll get some inspiration from you all for when IKEA opens up again.

Amelinda: Comfort to me is being out in nature, especially tall pines and doing bath rituals. Today is Beltane, so planning to add some pine needles and flowers to my bath today.

Tarik: To be honest this week was rough.

Tarik: Not having any family or my close friends nearby is taking its toll.

Nate: Ugh, I’m sorry to hear that. Have you been able to connect at all?

Tarik: I call on the phone. It is my mom’s 75th birthday. I try to cook and play video games, which helps some.

Nate: AWW! Happy birthday to her! I know how close you are to them. That graduation pic you shared on your Facebook was everything.

Tarik: I bought her new chef knife and a cookbook.

Nate: That’s sweet of you. I’m she appreciates it. And so Tarik.

Lucas: I’ve found myself calling different family almost every single day to help with that feeling of being disconnected. And it’s usually a video call which I typically dislike, but just seeing other people is so comforting right now.

Nate: What has everyone else been playing or watching? Lucas, I know you’ve logged some hours on Animal Crossing.

Lucas: Yeah… I’m already at about 75 hours right now. With so many regular daily routines gone, it’s so nice to have something familiar to return to and go through those routines in a virtual sense. I even change my outfit and take part in the same “chores” everyday

Salam: I’ve been listening to a lot of Lorde. Her album “Pure Heroine” came out in 2013 a little before entering my senior year of high school. Pop music around that time seemed a little generic, and Lorde summarized the feeling of wanting to grow up but scared to lose your adolescence. To this day, I find myself reminiscing the good ol’ days, even though I’m still in my early 20s. It brings me back to a simpler time of teenage angst scrolling endlessly through Tumblr.

Salam: Something I’ve been doing to ease my anxiety is journaling but I noticed I self-edit while I write so nothing felt authentic. I have a bunch of postcards laying around, every time I have a thought I just quickly jot it down and collect them.

Amelinda: I have been considering writing about how I’m feeling in this moment and what daily life looks like, because this is a time we will probably think back on as we get older. Send postcards to your future self?

Salam: Exactly, so I haven’t read them yet.

Nate: I love how writing has been a common theme here. This has certainly brought out creativity it seems. I can’t wait to hear the music our local scene is surely working on.

Lucas: In a weird way, it definitely seems like this has inspired everyone in some way to create

Salam: And perhaps we are looking at our past to inspire the future.

Amelinda: Has anyone else learned a new skill? Who’s making sourdough?

Justin: Been cooking so much. I feel like I’ve really learned a lot about cooking in this time.

Salam: SAME!!! I never cooked. Takeout for days. And not to brag, but so far no food poisoning!

Tarik: I have some duck eggs and thinking of making Singapore-style omelette with crab.

Nate: Haha, of course you would! You better have some pics of this food!

Tarik: I also been thinking about writing about okonomiyaki and how it is the perfect dish for these times.

Justin: The perfect dish for every time.

Amelinda: I’m breaking SO MANY DISHES which means I’m cooking more I think.

Justin: Like before I was following procedure for making recipes, which is cool. But after doing it so much I’ve gotten the concepts down, which I just never did because cooking was so infrequent. I am literally wearing a Julia Child t-shirt rn. I am the new Julia Child.

Lucas: I’ve learned to cook more a lot over the past year, and it has really come in handy during this time. Home cooked meals just HIT different.

Nate: I made this challah.

Nate: And this ramen. Ooooh, and this Shrimp & Grits.

Justin wtf Nate. TARIK, YOU AIN’T THE ONLY ONE WHO CAN COOK.

Nate: America’s Test Kitchen y’all. I’m a member of a Facebook group and swap recipes with nice ladies from the South.

Nate: Thanks! My plating needs a little work, but I was excited!

Salam: I made baklava celebrate the start of Ramadan.

Amelinda: I’m at the stage where I’m foraging and pickling ramps and making crackers with leftover sourdough starter.

Lucas: I successfully made beer cheese sauce to go along with some Brat nachos (bratchos), and I felt so powerful

Nate: Oh, that too. They’re killing it with the digital content. Who’s your favorite?

Nate: I enjoyed the pantry pasta episode. Brad is less of a heartthrob (to me) since his disappointing appearance on Hot Ones. But I still appreciate him!

Justin: Disappointing?! How? I didn’t see it.

Salam: Can we talk about Delany?!?

Justin: I feel like I came into quar not liking Delany, but I’m gonna come out loving him.

Justin: We stan a supportive helper.

Salam: We can’t all be a main cast member. Also…this is my “wourder” bottle.

Nate: Well, while you all have been keeping up with the trending vids, Jeff (my fiancé) and I have been digging through old DVDs. We both stopped collecting in the early/mid 2000s pretty much, so our DVD player has been roaring through the following:

Justin: What a slice in time.

Lucas: “A slammin’ combo of dance and drama”

Salam: that movie convinced me that romance equaled brushing your teeth together.

Salam: TikTok has taken over. I finally learned the savage dance so I am ready. Once I look presentable I will film it.

Nate: OMG the Beyonce remix is giving us so much life right now!

Salam: SHE GOT IT FROM TINA!

Lucas: I literally opened TikTok for the first time in months and the first video is The Rock doing the dance, so clearly it’s the thing right now.

Lucas: Was browsing more and THE BREWERS USE TIKTOK AND NOBODY TOLD ME?. I’m so down with this app now.

Salam: Looking forward to: First on the list is hugging my dad and a close second is getting dinner with my best friend at our usual spot, Beans & Barley.

Justin: Tall Pines and Bath Rituals in the name of Amelinda’s quar record.

Lucas: It’s no surprise for anyone who knows me but I can’t wait to be at Miller Park again (if we’re so lucky) and watch the Bucks play in the playoffs at the Deer District. It still seems like Winter to me without those activities

Amelinda: Haha, yeah I should write that. “The Longest Winter.” Hopefully not Lucas’ memoir. Salam, I actually dreamed about a simple meal in a restaurant. The things I took for granted.

Nate: Well, this was so fun everyone. Let’s cap it off with a big pet photo drop. Go!

Lucas: I think this is what the kids call “Golden Hour.”

Lucas: My dog Evan in his throne, which is also a lawn chair.

Justin: Hang in there: From Slim Jim.

Salam: I don’t have a pet but the closest is my salt and pepper shaker named Gubler, after the one and only Matthew Gray Gubler.

Justin: This was fun

Salam: MISS AND LOVE YOU ALL!!