Hold on to your heads, here’s all you need to know about Milwaukee’s bobblehead museum

Hold on to your heads, here’s all you need to know about Milwaukee’s bobblehead museum 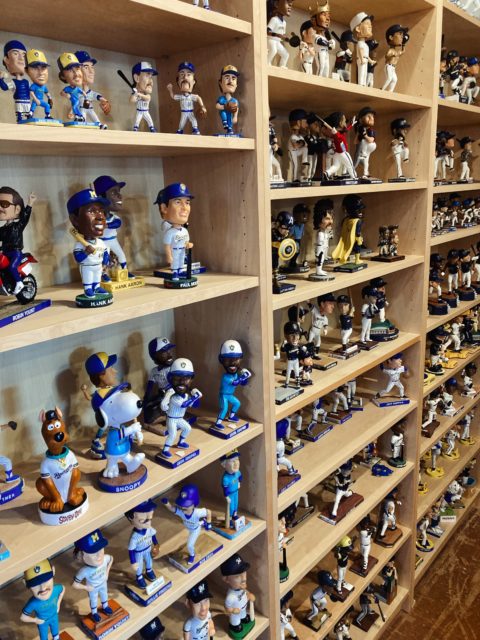 On warm sunny days, I like to walk to work. I live in Walker’s Point and there is something about morning walks that makes you feel connected to your neighborhood. Bars that are meant to be full of life are abandoned. There are people waiting for the bus on their morning commute and when I walk to work, I always pass by a hidden gem, The National Bobblehead Hall of Fame and Museum.

The museum has more than 7,000 bobbleheads on display, making it the world’s largest collection of bobbleheads. I was intrigued. How did this happen? How does someone become a collector and decide to turn that into a museum? I spoke to Phil Sklar, co-founder and he said the museum started from a simple passion for collecting.

“My dad got me into collecting baseball cards growing up, other sports cards and memorabilia,” said Sklar. “That sort of evolved to bobbleheads.”

In 2003, Sklar’s childhood friend was working for a minor league team called Rockford Riverhawks and received a bobblehead of their mascot Rocko the Riverhawk, which ultimately became the first of the museum’s collection. While attending the University of Milwaukee – Wisconsin, the duo decided to circulate sports games that specifically gave out bobbleheads and the collection started from local games.

“Before we knew it, it was out of control,” said Sklar. “We had more bobbleheads than we had room for.”

The museum goes beyond sports figures, from Avenger superheroes to the cast of “The Office.” My personal favorite finds were Carole Baskin and Bernie Sanders with his mittens and mask. Sklar said by 2013, they had roughly 3,000 bobbleheads from traveling and trading with other collectors. But they didn’t only collect, they also started to make their own heads, the first being Michael Poll, a Milwaukee-born Special Olympics athlete for Team Wisconsin.

“We had no idea how that process worked but we learned a lot,” said Sklar. “It also helped us realize that there was a need in the market. We came up with a long list of names and started making bobbleheads.”

A museum like this is a blast from the past, you might come across figures that were part of pop culture in the previous years, evoking a nostalgic feeling. If anything has been turned into a bobblehead, they have it. If you’re stopping by this hidden gem, keep an eye out for the unexpected and who knows maybe in the future you might be part of the growing collection.