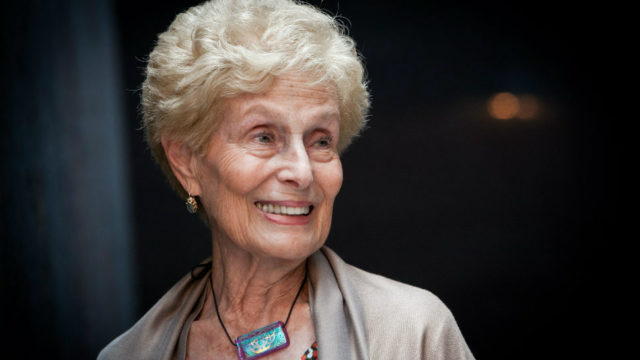 It is becoming increasingly rare to hear firsthand from someone who experienced the horrors of the Holocaust. The reality is, within a generation, the world will likely lose most people who can say, “I saw it.”

Estelle Glaser Laughlin was there. Listen to her story below.

Every year, Alverno College hosts its Holocaust Remembrance Day. The ceremony allows students and staff—and anyone tuned into the live stream—to listen directly to a survivor, while it’s still possible.

This year, Alverno’s guest was Estelle Glaser Laughlin, a native of Warsaw, Poland. She was just 10-years-old when Nazis invaded her home country. She and her family were forced into a ghetto, then a concentration camp and eventually, were liberated by Allied forces. She talks about redemption, resilience and resistance of the people throughout the Holocaust. Though they were faced with hatred, oppression and later, even death, she wants history to remember that people fought back in the ghetto. She wants to stress the moral resistance of heroic teachers who ran hidden schools, those who simply owned books and people who ran theaters, even though all of these things were life-threatening.

“Imagine theaters when there was no bread,” she says. “We needed poetry more than we needed bread.

Laughlin spoke for nearly 90 minutes during her presentation at Alverno and spoke with 88nine one-on-one before taking the stage.

"The purpose is not to curse the darkness of the past, but to illuminate the future."

She says that it used to be hard for her to talk about her story, but “suffering needs witness.” Now, she tells it to lend a voice to those whose voices were silenced and to those who are suffering injustice today.

Laughlin says, “The purpose is not to curse the darkness of the past, but to illuminate the future.”

Listen to her extended interview in the podcast above.