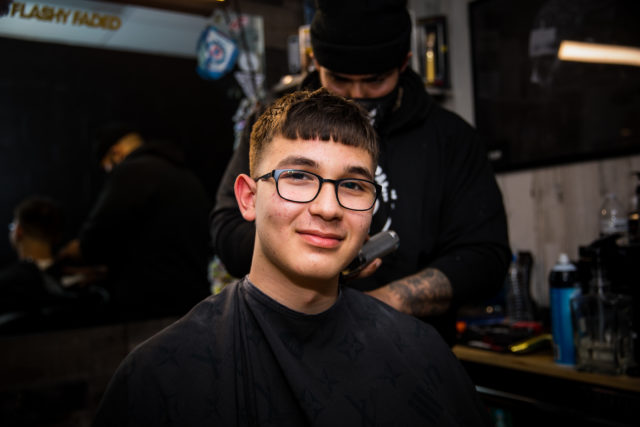 Sebastián “Sebas” Fuentes of the Milwaukee hip-hop band Browns Crew, Ambrose Wilson-Brown, Samer Ghani and Jose Perez (known as JP) are helping high school boys to open up about their mental health struggles with a visit to the barbershop.

Sebas says that in the midst of the pandemic, social strife and uncertainty they wanted to reach out to youth and make sure they’re alright.

“We already know that young boys of color are already under high stress a lot of times,” says Sebas. “The whole concept was to not only provide haircuts to young boys so that they could feel fresh and feel good about themselves but it also provides a space where we can speak about these topics freely.”

But why the barbershop?

“The barbershop, it’s a big thing,” says JP, owner of Flashly Faded, the Milwaukee barbershop where the guys hosted conversations surrounding mental health for youth. “They see us as psychiatrists or therapists. They use us for so many things.”

The barbershop talks took place one day a week over the course of three weeks.

Sebas says that there’s a lot of attention in mental health initiatives to reaching out to at-risk youth.

“But what happens when you become 18, 19?” asks Sebas. “The youth part maybe gets dropped out, but you’re still at risk, right?”

The idea started with Ambrose and Sebas. Ambrose saw a powerful exhibit where young Black boys had mentors and strangers look portraits of them in their every day.

“All the boys were looking like boys,” says Ambrose. “Call it mean mug or ice grill. [They were] not smiling. Just looking straight ahead.”

Ambrose says the boys in the exhibit had positive emotional responses to being seen. That idea stuck out to Ambrose. He reached out to Sebas, who he knew from working with on youth mental health projects, about his idea to bring a project like that to Milwaukee. Sebas took off in organizing something similar to what Ambrose saw. Their project went on to be mental health chats and accompanying portraits of the young men who participated.

First, Sebas reached out to Samer for his work in photography and for how he connects to people in the city through his work.

“It was a no-brainer for me,” says Samer. “I grew up in a single-parent household. So this is the kind of stuff that I want to be doing, given the platform that I’ve been given by our community.”

Samer has a portrait series that looks at male body image, he also takes amazing photographs of musicians, artists and the city itself. Samer says that as a child of immigrant parents there can be a lot to navigate socially as a student.

And JP agrees. JP says that he struggles with anxiety and depression but he talks about it and wants to signal to youth that they can talk about their anxieties as well.

“It’s very hard when you’re growing up and you can’t really connect with your parents or anybody,” says JP. “So why not talk to us? We dress like them, we talk like them.”

The guys say that the students were a lot more resilient than they considered themselves to be.

“These kids are very bright,” says Samer. “They’ve gone through so much ambiguity that they’re equipped with a lot more skills than they think they are.”

The crew gave advice from their own experiences to the students if needed. They found that the students often wanted to talk about their futures. They focused on things like what schools they were going to and making it to graduation.

“We forget that our boys are children sometimes because they got mustaches and beards and because at the end of the day they’re boys,” says Ambrose. “I’m really happy to hear all the guys talk about their own personal journeys because that was the other idea in the back of my head. I had a transformation seeing those pictures, just like the boys had their own transformation. I’m really hoping that we do continue doing this and it grows as 2021 continues.”

Ambrose, Samer, Sebas and JP got to see what they intended the project to be — an experience where young men can be seen and heard. All four of the organizers agreed that they want to do something like the barbershop talks again, so perhaps be on the lookout for a chat.